MINI has teamed up with London architecture firm Studiomama to build a series of tiny, modular living spaces, each configured to suit a different character.

Installed inside a former factory for Milan design week, MINI Living – Built By All features four compact living spaces based on a modular system, which allows the different spaces to be tailored towards different lifestyles.

The aim is to show how a flexible, modular system could allow a home to be adapted to better suit its owner.

"Today's standardised housing market is limited in its ability to meet the requirements of the individual," explained Oke Hauser, creative lead for MINI Living.

"We believe that ultimately the quality of a living space is determined by how well the residents identify with their home," he said. "MINI Living – Built By All turns people into active creators and puts them at the heart of the design process."

MINI Living is an initiative set up by the automotive company to explore the future of city living. MINI has previously worked with a range of architects and designers, including Asif Khan and Sam Jacob, to create experimental installations.

For this installation, the company asked Studiomama founder Nina Tolstrup to explore the "creative use of space". The result is a modular system comprising reconfigurable integrated furniture units – called "totems" – which are surrounded by a curtain screen to create a personalised micro-living space.

To illustrate the adaptability of the modular system, Studiomama created four capsule homes that match in size, but feature contrasting colours, layouts and furnishings.

A lemon-yellow unit features shelves lined with decorative objects and an assortment of plants, designed to suit a botanical illustrator, while the pink unit accommodates a studio for a pattern cutter, featuring ample storage for textiles and a functional workstation.

The blue unit is designed for a music producer, so features a sound-proof recording room and shelves that are perfectly sized to hold records. And the final unit, which is green, is adapted to accommodate a pottery collector.

Each of the four living units feature layers of fabric curtains on the outside, which can be opened or closed to create different levels of transparency and privacy.

The four living units are connected by a series of larger communal spaces, with a range of facilities including a large turquoise kitchen and dining area, a gym and a cinema space.

MINI describes the installation as a "living micro-neighbourhood in an old factory hall". The idea is that this type of setup could be created inside large unused buildings, to help alleviate the housing crisis affecting many of the world's cities.

"MINI Living provides creative solutions for collaborative urban living on a small footprint, but offering many possibilities and a high degree of flexibility," said Esther Bahne, head of brand strategy and business innovation for MINI. 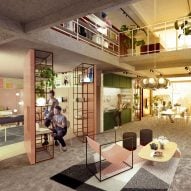 The exhibition also features a space called the Factory of Ideas, where visitors can use colourful blocks to make a miniature version of their own living space using the modular system designed by MINI Living and Studiomama.

MINI launched its MINI Living project in 2016 – and has since teamed up with Dezeen on a range of movies exploring the theme. This is the third installation the brand has created in Milan, following previous designs by SO-IL and On Design.

The brand's first permanent project is currently being built in Shanghai.

MINI Living – Built By All is on show at Via Tortona 32 from 17 to 22 April for Milan design week.

Today, 20 April 2018, Dezeen will be hosting a panel discussion in the space with Nina Tolstrup and Oke Hauser, as well as Mario Minale of Minale-Maeda and Design Academy Eindhoven creative director Joseph Grima. It will be available to livestream via our Facebook page from 6pm.