A secluded garden courtyard surrounded by brick buildings forms The Ada and Tamar De Shalit House, a shelter for victims of domestic violence near Tel-Aviv.

London studio Amos Goldreich Architecture worked with local office Jacobs Yaniv Architects to deliver the project, which provides the first purpose-built shelter for the charity No To Violence.

The charity was founded by human rights activist, Ruth Rasnic, who was a childhood friend of architect Amos Goldreich's mother, Tamar. The shelter is named after his mother and grandmother, Ada, who was a feminist involved in several Israeli charities.

No To Violence aims to raise awareness of domestic abuse in Israeli, as well as offering support and temporary accommodation to victims through a network of shelters.

In addition to offering refuge for families from diverse ethnic and geographical backgrounds, The Ada and Tamar De Shalit House is also the charity's administrative headquarters.

The building is located in a quiet residential neighbourhood and is surrounded by a mixture of private houses and apartment blocks.

It was designed to provide a secure and sheltered haven that gives its inhabitants a sense of home.

"The word home was repeated a lot in the brief from the charity," Goldreich explained in a video documenting the project, and our response was to design the building as a small micro village."

Following discussions with the charity to identify the key requirements of the facility, a proposal was developed that features private spaces and communal areas connected by a street-like internal corridor.

Goldreich was influenced by the work of artist Eduardo Chillida, who is renowned for his sculptures, which explore the relationship between solids and voids. In particular, the design of the building references Chillida's idea to hollow out a mountain. 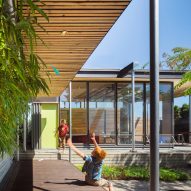 "This conjured up the idea of stone, hollowed out from the inside, leaving it with two surfaces: a rough external one, while the inner would be smooth and delicate," said the architect.

"This analogy became the main concept for our building which has two facades – the secure and protective exterior, and the inner facade, giving onto the central garden, the therapeutic heart of the shelter."

The building comprises a cluster of small houses that are staggered along two sides of the site. The internal corridor separates these spaces from the communal courtyard to give them a sense of privacy and separation.

Alongside private rooms for up to 12 families, other functions provided on site include a nursery, kindergarten, computer room, laundry, kitchens and a refectory.

Accommodation and offices for various staff are also incorporated around the perimeter of the green inner courtyard, which serves as a meeting place for residents.

The corridor encircling the courtyard is lined with glazing to allow parents to watch their children playing, and to create the sense of a seamless flow between internal and external spaces.

The main building volumes are clad in a uniform grey brick that gives them a robust yet domestic feel.

The durable and low-maintenance material is applied to both the external and internal facades to provide a consistent aesthetic that complements the surrounding neighbourhood.