A Rococo-inspired pouf, a plant-shaped chandelier, and table lamps resembling animals all feature in the latest furniture collection from Dutch brand Moooi.

Moooi presented its new range in an installation called A Life Extraordinary during Milan design week. It includes products designed by the brand's creative director Marcel Wanders, as well as designers including Maarten Baas and Atelier Van Lieshout.

According to the brand, the collection is intended to reference the "extraordinary diversity of life". It features furniture and lighting pieces that take their cues from the natural world, including "earthy" terracotta tables and flower-inspired armchairs.

Wanders, who is also one of the co-founders of Moooi, has designed a couple of pieces for the collection.

They include a lounge chair called 40 Winks. Made from upholstered leather, it is designed to be "as soft as a cloud, as cosy as a bed".

"With 40 Winks you can dream at any time of the day," said Wanders.

Other designers by Wanders include the Pet Lights, a series of table lamps made to resemble an owl, a rabbit and a penguin. They feature rounded glass bodies with golden details.

According to Moooi, they emit "a sunny, heart-warming light glow".

Regular Moooi collaborator Simone Bonanni contributed the Hana armchair and footstool to the collection. The dark red armchair is designed to resemble the curvature of flower petals.

"Sitting in their warm, cosy embrace feels like luxuriating within the soft petals of a spring blossom," said Moooi.

Other pieces in the collection include the Liberty Lounger by Atelier Van Lieshout, a wooden lounging chair with an angular silhouette and an asymmetric armrest.

The Rotterdam-based designer created the chair in a single day as part of a project to design one chair per day for a month. The prototype for the design was made without using any sketches or measuring equipment.

Design duo Kranen/Gille based their Plant Chandelier on the architectural structures found in nature. Influenced by the plant photography of German artist Karl Blossfeldt, the product features golden stems that evoke branches.

"Its silhouette follows the anatomy of sun-kissed tree branches, with a golden glow, which converges into frosted domes of light," explained Moooi.

The brand's in-house team Moooi Works created the Mega Chandelier, a light made of up several lamps, while German designer Bernhard Dessecker is behind Iconic Eyes, a hanging light made up of several eyeball-like lamps. 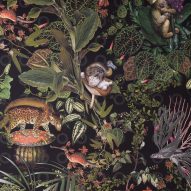 Moooi pays tribute to extinct animals with range of wallpapers

Other lighting pieces include the the Chalice Metallic Grey lights by Edward van Vliet and the Coppélia Suspended Black by Arihiro Miyake.

The collection is completed by Moooi Works's Rococo-inspired pouf Bart, a black version of Nika Zupanc's Golden Chair and a new modular sofa version of Maarten Baas' Something Like This seating.

Moooi is known for its eclectic style, with previous product launches include a ring-shaped rocking chair and an upended sofa. It always unveils a huge new collection in Milan.

This year's show took place in the Tortona district from 17 to 22 April 2018. It also included the launch of a range of wallpapers and textiles based on historical drawings of extinct animals.

Dezeen hosted a talk at the space. Dezeen editor-in-chief Marcus Fairs spoke to longterm Moooi collaborator Maarten Baas about his career to date and the pieces he has designed for the brand.

For job opportunities at Moooi, visit their company profile on Dezeen Jobs.