In this Design Dreams video produced by Dezeen for Moooi, designer Andrés Reisinger explains how his viral Hortensia chair design was brought to life.

The Hortensia chair is a moulded armchair, designed to evoke the feeling of sitting in a blooming flower. Reisinger collaborated with product designer Júlia Esqué to create a physical version of the piece for Dutch design brand Moooi.

Reisinger first posted a digital render of the Hortensia chair to Instagram in July of 2018, after which it quickly became a viral sensation, and formed part of the first wave of NFT designs.

Reisinger searched for a collaborator to help turn his digital design into a physical object for six months before partnering with Moooi and Esqué.

In this video interview, Reisinger describes how he and Esqué experimented with unconventional textures when working to bring the piece to life.

"I was exploring digital textures, trying to extract these feelings, this sensibility, this tactility" he said.

"He asked me, would you dare to turn this texture into a repeatable surface, that we can make and that we can prototype?" added Esqué.

"[We talked] about the feelings, the way that we would imagine the chair living" she said.

The chair is made up of 20,000 pink fabric petals, which were clustered together into distinct modules, evoking the hydrangea flower that the chair is named after. Reisinger and Esqué note how one of the main challenges of creating the piece was how to replicate this effect in reality.

"The outcome had to be vaporous and light," said Esqué. "We knew that these petals or these flowers had to fight a bit against gravity."

The designers' technique results in a soft, fluffy effect, in line with Reisinger's original 3D design. 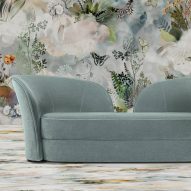 "It's difficult to find people that want to believe you, and really see your vision of the future," said Reisinger.

"The collaboration with Moooi was not only for making Hortensia available for everyone in the world, but also to give Hortensia another life." he said.

This video was produced by Dezeen for Moooi as part of a partnership. Find out more about Dezeen's partnership content here.