The company hired by Facebook to combat fake news has rented eight floors of office space inside the Jean Nouvel-designed Torre Glòries skyscraper in Barcelona, Spain.

Competence Call Centre (CCC), a service used by Facebook to remove fake news, hate speech and violent content from the social media platform, has acquired 9,000 square metres of office space in the building, according to Spanish economic newspaper Cinco Días.

CCC taking on offices in the building is a coup for the emerging technology district it is situated within – particularly as the Torre Glòries has been notoriously difficult to fill.

Originally called the Torre Agbar, the 38-storey skyscraper was designed by French architect Jean Nouvel and completed in 2005.

Merlin Properties renamed the tower when it bought the tower for €142 million (£123 million) in 2017 from water company Agbar Group, the second time the property changed hands in just three years.

Previous owners had struggled to retain tenants, who complained about the awkward donut-shaped floor plan and windows that were too small for good views but still allowed sunlight to dazzle the occupants.

The tower's new high-profile occupants would enjoy the results of a €15 million (£13 million) overhaul by the Spanish developer.

Inspired by the profile of Montserrat rising beyond the city, the tower's form garnered multiple nicknames as it took shape, with even Nouvel himself admitting in interviews that his design was somewhat "phallic".

It had been hoped that the European Medicines Agency would take some floors in the Barcelona tower when it announced the relocation of its headquarters from London following the Brexit decision, but the Spanish city lost out to Amsterdam. 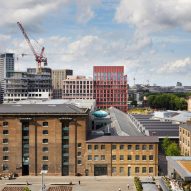 CCC has already opened an office in Essen, Germany, for their work with Facebook. Here the company hired 500 employees, who are engaged in deleting content that breaks Facebook's rules from the platform.

It is not clear yet if CCC will be performing a similar task for Facebook in Barcelona. Its careers website shows it is currently hiring community managers with fluency in a wide spread of languages, including Danish, Dutch, Swedish, Norwegian and various Spanish dialects across Europe and South America.

CCC confirmed to Dezeen that it would be offering 500 new jobs at the Torre Glòries, but said: "We cannot disclose our partners".