An architecture centre, co-working space and apartments are housed within a development of stacked glazed blocks by OMA, which creates a "knot" around a busy intersection in Copenhagen.

Blox incorporates the Danish Architecture Centre (DAC), offices for creatives and build-to-rent apartments. Dutch architecture firm OMA was commissioned to design the development by the Danish philanthropic organisation Realdania back in 2006.

Nearly 12 years later, OMA has completed the project in Denmark's capital, stacking green glazed blocks around the pre-existing road that runs through the site.

Rather than adopt a traditional mixed-use programme, with public functions at ground level, offices in the mid-section and housing units at the top, OMA chose to mix the spaces together.

"The infrastructure situation gave us the idea of making a mini city," Ellen van Loon, OMA partner and lead architect on the BLOX project, told Dezeen.

"If you go into it you see the road crossing the building. I call it an inhabited infrastructure knot," added van Loon, who is one of the judges for the inaugural Dezeen Awards.

Blox's interlocking design re-works a city block as a three dimensional loop, with homes and offices rotated around the centrally placed architecture centre. Along with more standard exhibition space, the DAC features a working architectural office.

"The architectural centre is a kind of living animal, embedded inside other functions," said van Loon.

"People don't want a sterile museum, they enjoy seeing the production, how we work, how the models are made," she continued. "The most important thing to me with this building is the architecture museum really feels like a production space with an exhibition space, and not a traditional museum."

Arranged in a central ring of blocks made from fritted white glass, the transparent design is intended to open the architecture centre to the offices as well as the general public. It is hoped this will encourage creative cross-pollination between the various companies using the co-working space.

"It makes a lot of sense – these kinds of disciplines are not stand-alone disciplines these days," said van Loon. "By creating so much transparency it could stimulate collaboration."

At the base of the building the public areas are housed in independent volumes, and at top levels the apartments are separated and set back from each other for privacy, overlooking a central courtyard below shared by all of the building's inhabitants.

Described by the architected as "pixels", the geometric panels of iridescent glazing were chosen to tie the building to its location.

"We chose the green on purpose because the water of the river in Copenhagen has this really beautiful deep green colour, and the green at the top of the building connects also to the many little towers on the skyline with all kinds of copper roofs," explained van Loon.

Set on the site of a former brewery, the waterfront location of Blox puts it at an important crossroads between the Danish parliament buildings and the harbour. 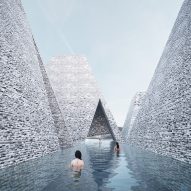 Ranked at 16 on Dezeen Hot List 2017, the Rem Koolhaas-founded architecture practice has also recently completed the Qatar National Library in Doha, and a gallery tower for the Fondazione Prada complex in Milan.

Copenhagen's harbour is currently a design hotspot, with Kengo Kuma commissioned to create an aquatics centre and public baths for the waterfront. Australian architect Marshall Blecher and Danish design studio Fokstrot are also currently collaborating on floating islands that will create miniature public spaces on the water.