Nine dark-coloured blocks circle a forest clearing that acts as a courtyard for this home by Mexican architects Fernanda Canales and Claudia Rodríguez.

Canales and Rodríguez collaborated on the 6,500-square-foot (604-square-metre) Casa Bruma project, which serves a holiday home for a young family.

The house comprises cuboid units of varying heights, each accommodating a different function. These are strategically located for the best views and relationships to one another, and so all of the existing trees were left standing.

"The result is an 'exploded house', where the dwelling is composed of isolated volumes that are placed according to the views, the orientations and the existing vegetation," said the architects.

The residence is located about 100 miles (161 kilometres) southwest of Mexico City, and its geometric design contrasts with the dense foliage surrounding the property.

Board-marked black concrete covers the exterior, with flat roofs topping each of the blocks to add cohesiveness to the project. 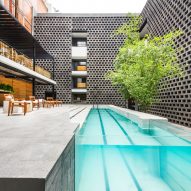 Four of the volumes are used as the principal living areas, such as a kitchen, dining room, and sitting room, and are linked together with covered walkways.

A master bedroom is located above a children's bedroom in one, and a studio is above the dining area in another.

The five other boxes contain two guest rooms, a private apartment, a garage, and a utility room.

Most of the rooms have large floor-to-ceiling windows and views of the courtyard. Black and white walls, oak ceilings and polished basalt floors decorate the interiors.

Two of the boxes also have roof access, creating terraces over the living room and a guest bedroom. The rest of the buildings are topped with greenery.

All of the water used for the house is sourced from collected rainwater, and landscaping uses plants native to the region.

Black concrete is a popular construction material used in Mexico, and throughout Latin America. Examples of other black concrete designs include the courtyard of a hotel in Mexico City made with black concrete blocks by JSa, a rectangular holiday retreat on the outskirts of the city by Cadaval & Solà-Morales, and a house in Costa Rica with separate zinc and concrete volumes by MG Design Studio. 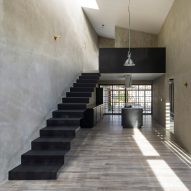