Japanese designer Yuri Suzuki's has created a singing washing machine and a musical kettle, which were in his solo exhibition Furniture Music, at London's Stanley Picker Gallery.

The exhibition, which took place last month, sets out to explore how everyday sounds in the home can impact our mood.

Laid out across a minimal white set with a cartoon-like representation of a kitchen, are everyday appliances designed by Suzuki to enhance the surrounding environment through sound.

Suzuki, a London-based designer and sound artist, believes that sounds that "exist at the periphery" of modern life, such as the humming and whirring of appliances, can greatly impact our moods.

By challenging how these sounds are designed, Suzuki believes we can create better living and working environments.

"Furniture Music attempts to re-design the domestic soundscape and propose ways for sound to not turn into noise but rather help enhance harmony and comfort within one's surrounding environment," explains Suzuki, who has spent a decade creating soundscapes using software, art installations and product design.

"The everyday sounds of our contemporary industrialised society, such as those from computers, mobiles, appliances, transport, and construction, generate dramatic levels of noise pollution affecting psychological processes of the brain – such as one's mood – in ways we are often unaware of," he continued.

Exhibited pieces included a dining table with an acoustic chamber inside that amplifies any movement or sound made on its surface such as the pouring of drinks or tapping fingers.

"If you have a conversation with someone, it always feels more comfortable to have subtle noises around," explained Suzuki. "This piece is my attempt to create a table that allows people to have better conversations."

A kettle that plays music through its spout when it's boiling, and a blender and washing machine that play music instead of making whirring noises were also displayed in the exhibition's kitchen area.

"Washing machines and blenders are the most noisy household tools," said Suzuki. "This idea came from composer Matthew Herbert, who asked me: "what if we could use sound from them to make music instead of disruptive noise?"

In addition, visitors were invited to try out a mobile phone fitted with an old-fashioned music box. Instead of electronic sound from a tiny speaker, the phone plays live acoustic sound.

Also on show was an immersive installation titled Sound of the Waves that featured automated rainsticks – percussion instruments made from hollow tubes partially filled with small pebbles that simulate the sound of rain or waves.

Mounted on poles, the rainsticks are slowly rotated using a motor controlled by live data streamed from beaches across the world.

Suzuki also exhibited one of his White Noise machines that transform and distort visitors' voices. Originally launched in 2009, the machines are designed to capture voices and then play them back with various effects such as speeding them up or down, or playing them back in reverse.

Suzuki believes that despite recent advances in technology, when it comes to manufacturing everyday appliances, sound design is falling behind other areas of design and technology, "partly due to the field's lack of definition". 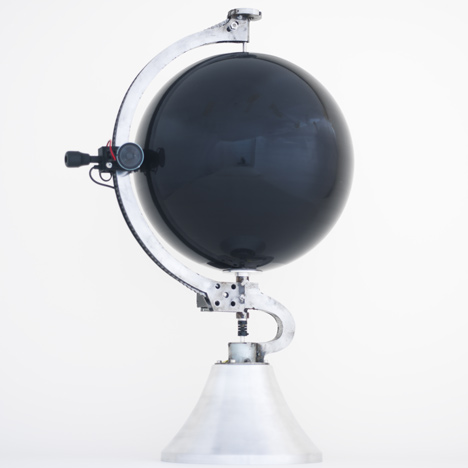 The Sound of the Earth by Yuri Suzuki

Of course, amazing creators in the past have been working on this field such as Brian Eno, Suzuki told Dezeen. "However if you compare it with visual design, haptic design and food design, the field still hasn't been investigated enough in my opinion. The effects of sound design are not clear to compared to other senses."

"Sound is a very strong medium and it influences us a lot," he continued. "I hope this exhibition stimulates visitors to listen carefully to what sort of noises or sounds exist in the world, and to consider if that is what our homes, cities or parks should sound like in the future."

The exhibition's title, Furniture Music, comes from French composer Eric Satie’s description of his own music as "a sound that should not be actively listened to, but present at the periphery of our daily lives".

"I have always been inspired by his compositions as well as Brian Eno's work," said Suzuki.

The exhibition was a culmination of Suzuki's Stanley Picker Fellowship, which took place in 2016.

Suzuki used his Stanley Picker Fellowship to work with Kingston University’s teaching staff and students to investigate the psychological and physical agency of sound, and explore how more thoughtfully designed soundscapes could improve our daily lives.

By staging a series of design experiments, workshops and interviews in collaboration with sound practitioners, including musician Matthew Herbert among others, Suzuki developed a number of designed products proposing new ways in which sound can inhabit the everyday.

Previous projects by Suzuki include an installation of 30 swinging pendulums that played calming noises in a courtyard during Milan design week last year, and a set of five little robots that turn coloured scribbles into music.

Photography is by Corey Bartle-Sanderson.