The wooden sound machine, which has a bright-yellow cover, contains eight different types of sounds, including bells, ocean waves, white noise and bird song, with all sounds able to be combined with one another.

By flicking the machine's 32 switches, which also control volume, effect and speed, users can mix and match the different sounds to create their own unique soundscapes.

Suzuki, who is a partner at design consultancy Pentagram, drew on an earlier project when creating the Ambient Machine.

"It started from my project in the Stanley Picker gallery Furniture Music exhibition," Suzuki told Dezeen.

"That was music and sound designed for non-active listening, for creating atmosphere; the idea started with Erik Satie and was then developed further by Brian Eno," he added.

Suzuki also became more interested in ambient sounds during the UK coronavirus pandemic lockdown, leading him to play around with surrounding sounds.

"Then we all experienced pandemic lockdown, we had to stay in one place more than ever, and I started recognizing surrounding noise and ambience more," he said.

"I came up with the idea to make a device that would function to create ambience, and act as a 'sound conditioner' (like an air conditioner)," Suzuki added.

"In Japan in ancient times, there were always sort of non-active instruments to create atmosphere in the space, such as wind chimes – Shihi-odoshi – and water piano caves."

The Ambient Machine is made from walnut and printed circuit board (PCB) and has an internal memory card that holds the sound data, as well as an internal speaker that sends the ambient sound out from the back of the machine.

"[The design] came from my old sketch while I was studying at Royal College of Art; somehow the shape stuck in my mind," Suzuki said.

"The reason that I selected wood and yellow color composition is in reference to old electronic household equipment," he added.

"Also my influence came from Japanese artist MaywaDenki, where I used to work. The structure of the box is referencing to a speaker box to ensure good acoustics." 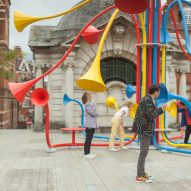 Designed to be relaxing, the sound options on the machine also include long, drawn-out tremolo drone tones, stutter pad – which Suzuki describes as sounding "almost like the flapping of a bird's wings" – a ukulele rhythm recorded on an old cassette tape and echo kalimba, a traditional instrument originating with the Shona people of Zimbabwe.

"Each of the sounds can be enjoyed on their own, but are also built to be mindful of each other," Suzuki said.

"Each sound is designed to allow the other sounds room to be heard when played all together, ensuring that no matter what combination of sounds is played, no voice is ever lost."

Suzuki hopes that the device will be used by people to create a soundtrack for their everyday lives.

"I think this will be a unique opportunity for everyone to decide the soundtrack of the day, and it's also all customizable," he concluded.

"Due to the pandemic we are more spending time in our homes, so it is beneficial to create a comfortable sound environment in the home."

The Ambient Machine was designed in association with Japanese furniture company E&Y and featured in its "Thirty Six Views" Exhibition in Roppongi, Japan.

Other recent projects by Suzuki include an interactive installation in London that lets people communicate through tubes and an adaptable soundscape for electric cars.