MIDI, the global standard that allows digital musical instruments to talk to each other, has a new brand identity based on sound waves designed by Pentagram.

The logo for MIDI, which stands for Musical Instrument Digital Interface, was created by Pentagram partner and musician Yuri Suzuki together with graphic designer and partner Sascha Lobe.

This refresh of MIDI's identity replaces its previous wordmark and follows the 2020 release of MIDI 2.0, the first significant update of the standard in over 35 years.

"In January of 2020 we adopted MIDI 2.0, the biggest technical update to MIDI since 1983, so it was definitely time to rebrand the technology," MIDI COO Athan Billias told Dezeen.

"At the same time, we took the opportunity to rebrand the MIDI organisation."

MIDI standards, which are the backbone of almost all electronic music, were first agreed in 1981 when makers of digital musical instruments got together to agree on protocols so their products could work together when linked via MIDI cables.

The standards are overseen by the non-profit MIDI Association.

"MIDI is the benchmark of composing music," said Suzuki, who is a sound artist as well as a designer. "It's also a huge achievement in music history."

"I grew up with MIDI and have used it at every stage of my career," Suzuki added. "Ninety-nine per cent of my installations use MIDI as their central language."

The new brand identity was partly informed by the 2020 MIDI 2.0 update, which for the first time allows MIDI data flow between instruments in two directions simultaneously.

"The final design really captures all of that very well," Billias said.

The symbol is accompanied by the MIDI acronym in a bespoke sans-serif typeface designed by Lobe's team.

The curves of the M were created by combining waves with frequencies of 440 and 880 Hz, which correspond with the notes A4 and A5 on a keyboard. 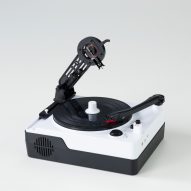 A4 is the A note above middle C. Its frequency is 440 Hz, which is the benchmark pitch for almost all western music and is known as concert pitch or Stuttgart pitch, after the German city where the A440 standard was agreed in 1834.

A5, which has double the frequency, is an octave higher.

"Stuttgart pitch is a standard tuning method to calibrate acoustic equipment and instruments that is known by every musician and sound engineer, which made it a perfect reference for MIDI," Lobe said.

"We started from 440 Hz as the tuning sound, the Stuttgart pitch, which is also where Sascha comes from," Suzuki told Dezeen.

"Sascha's team was experimenting with cross-modulation of two sine waves and creating beautiful patterns on an oscillator," he said.

"This led to the final shape. It's a very clever way to represent the 'M' from MIDI."

The new identity is now being used as part of a campaign to promote MIDI to a new generation of music makers who are using smartphones and other portable devices as well as traditional digital instruments.

In addition to his role at Pentagram, Lobe is head of design at London's Architectural Association school while Suzuki, who joined the studio in 2018, has previously worked on a number of sound design projects.

As part of Dezeen's Virtual Design Festival, he shared his Sound of the Earth: Pandemic Chapter, which let people submit and experience global sounds during the coronavirus lockdown. In an interview, he explained that people have become more sensitive to noise during the pandemic. The sound artist has also created a machine that lets you engrave your own records, talked to Dezeen about the fun side of sound design.

In 2018 he dropped an anti-Brexit acid house album together with Pentagram while in 2020 he composed the theme music for Dezeen's Face to Face podcast series.

Photography is by Kimberly Lloyd.