BMW-owned creative company Designworks has designed a "human-centric" interior for the Virgin Hyperloop One capsule to be used on the Dubai system.

The design made its global debut earlier this year in February, with a full-scale model of the passenger pod presented at Dubai's City Walk mall.

However, official images of the interior were kept under wraps, as was the name of the designer.

It has now been confirmed that Designworks, owned by German automobile company BMW, worked with Virgin Hyperloop One, and Dubai's Road Transport Authority (RTA), to create the pods' interiors.

The pods have a sleek, futuristic aesthetic, with adjustable white leather seats and integrated touch-screens.

Designworks aimed to create a more sophisticated and "user-central" spatial experience that goes beyond the conventional utilitarian idea of public transport.

"With the Virgin Hyperloop One design, we wanted to create a new visual expression for a new mode of public transportation," said Designworks design director Johannes Lampela.

"The central challenge the Designworks team faced was how to create a comfortable and engaging interior with no windows, and a current requirement for passengers to be seated throughout the journey," said the company.

"Designworks took what might at first glance be a very restrictive environment and transformed it into a more personal and uplifting sensory experience that can be both memorable and enjoyable," it added. 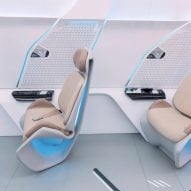 Planned to launch as soon as 2020, the high-speed transportation system will take passengers on the 87 mile-long (140 kilometres) journey between the Dubai and Abu Dhabi in 12 minutes – a route that takes around 90 minutes by car.

Each 8.7-metre-long pod, designed to accommodate up to 10 people, is electromagnetically propelled through a semi-vacuum tube. Floating above the track, the capsules could reach speeds up to 1,080 kilometres per hour.

For the pods Designworks team aimed to achieved a "human-centric" interior through "multidirectional and personally-controlled light, digital displays, and premium comfort."

The seats also include integrated heating and cooling, and passengers can enjoy personalised entertainment through built-in displays.

Designworks took design cues from traditional Arabic patterns for the interior, in a bid to combine a futuristic vision with intentional cultural references.

The design is "anchored in the cultural legacy of the kingdom while acknowledging its contemporary achievements and aspirations." 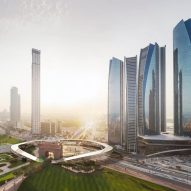 Virgin Hyperloop One is currently negotiating the next stage of development with the RTA, with the aim of building the world’s first hyperloop transportation system in the Middle East.

Hyperloop was first conceived by Tesla and Space X founder Elon Musk in 2013, but the billionaire entrepreneur is no longer directly involved with any companies developing the technology.

Links are proposed for many destinations around the world, by a range of well-known architects and designers. BIG has designed a hyperloop system for Dubai while, in central Europe, there is a proposal to connect Bratislava, Vienna and Budapest.

Progress is also being made in the USA, where Elon Musk's Boring Company has been given permission to start construction of a Washington DC to New York hyperloop tunnel.