The fate of 17 of the UK's postmodern buildings has been secured by preservation body Historic England, in a bid to "stem losses of this important style of architecture".

The newly additions to the National Heritage List for England were all designed between the 1970s and 1990s, and encompass a range of uses, including housing, education and law.

Among the listings are the works of some of postmodernism's greatest proponents, including a home designed by architecture critic Charles Jencks with architect Terry Farrell, and several works by CZWG.

"These are scarce survivals of a really influential period of British architecture and these buildings deserve the protection that listing gives them," he said. 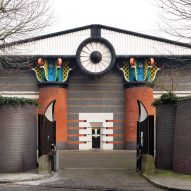 The 17 buildings join seven other examples of the movement already on the register, including the Isle of Dogs Pumping Station and No 1 Poultry.

Dezeen predicted the resurgence of postmodernism in 2015, with a dedicated content series. It featured a guide to postmodern architecture and design, as well as key building studies and opinion columns.

An exhibition devoted to postmodernism opens later this month at the Sir John Soane's Museum in London, on 16 May 2018. The Return of the Past: Postmodernism in British Architecture will explore key projects by the architects that formed the cornerstones to the movement, including Terry Farrell, CZWG, Jeremy and Fenella Dixon, John Outram, Edward Jones and James Stirling.

The home of architecture critic, designer and most famous advocate of postmodernism Charles Jencks, Thematic House is an early example of the movement, built between 1979 and 1985. Elements of the redesign of the 1840s residence are themed around the seasons, and the passage of the sun and moon.

One of a group of housing estates built during a period of regeneration in London's docklands, China Wharf was designed between 1982 and 1983 by Piers Gough of CZWG.

The bright red facade of the building facing the water features arched windows, while the other elevation has tall openings that reference neighbouring Victorian warehouses. Inside a "jazz moderne" foyer features the bright colouring and granite cladding typical of many buildings of the movement.

Wilkinson took the waterside architecture of Hong Kong, Sydney and San Francisco as the starting point for this docklands housing complex, which was built between 1987 and 1988. But the dramatic sloping roofline of the 164-flat Casades was informed by the coal conveyor in nearby Deptford.

For the interior, the architect drew on art-deco detailing that contrasts the industrial location.

Porthole windows lend a nautical appearance to this waterside estate by MacCormac Jamieson Prichard and Wright, which was built at London's docklands between 1986 and 1988.

Other referential details include red brickwork and arched openings that hark to Victorian dock buildings.

Another estate built as part of the regeneration of London's docklands, Price and Cullen's 95-home Swedish Quays estate was built between 1986 and 1990.

The scheme draws from a range of architectural styles, incorporating classical columns, and gridded glazing reminiscent of Charles Rennie Mackintosh.

This pair of semi-detached houses in Hackney was designed as public housing by Colquhoun and Miller, and built between 1981 and 1984.

The houses are set at an angle to each other, to frame views of the Church of St John the Jerusalem.

Designed by Jeremy and Fenella Dixon for the Kensington Housing Trust, and built between 1977 and 1979, this pair of terraces and block of flats reference the design of neighbouring 19th-century housing with its patterned brick facades.

"It is a successful example of the way postmodernist architecture engages with urban and historical context and draws in modern as well as historical motifs," said Historic England.

John Outram designed the Judge Business School within the former Addenbrooke Hospital in Cambridge. Behind the 19th-century facade of the listed building, he inserted interiors decorated in a mishmash of patterns and colours.

Built between 1981 and 1982 to house a collection of rare books. Joanna van Heyningen and Birkin Haward's design features a striped brick facade, and a barrel-vaulted roof that references the college's first library.

"Its form is like a jewel casket, which is appropriate given its contents," said Historic England.

Spiraling columns designed to look like giant screws front this building originally designed as the craft, design and technology wing of Bryanston School.

Completed by CZWG in 1988, the red brickwork behind the stone columns responds to the design of the Grade I country house that the school stands in the grounds of.

Eldred Evans and David Shalev responded to the then newly issued Courts Act of 1971 design memorandum for the Truro Courts of Justice. The building features courts spread across just a few levels linked by brick steps and is externally coasted in light-grey render.

"We tried to create a building of unique character and appropriate dignity which was at the same time unassuming, not overbearing… to create an inviting and relaxing environment for members of the public using the building," said the architects at the time.

"They have succeeded in creating at place which is at the same time humane but reflects its sober purpose," said Historic England.

A turning point in the career of modernist architect Andrew Derbyshire of Robert Matthew Johnson-Marshall (RMJM), the Hillingdon Civic Centre is a reinterpretation of the Arts and Crafts style. Completed in 1979, the building is covered by intersecting pitched roofs covered in dark brown tiles.

"The design was finalised after RMJM's original modern scheme was rejected by councillors. They required something more like the buildings they recognised from the places where they lived," explained Historic England.

"Derbyshire responded with a scheme modelled on buildings nearby, Arts and Crafts churches, and housing in Hillingdon borough that also drew on the Arts and Crafts movement."

CZWG included circular forecourts in the design of the Aztec West business park, which comprises red brick buildings with concave facades. It was completed in 1988.

"The circular forecourts followed the turning circle of a car, celebrating the mode of transport through which out-of-town developments could thrive," explained Historic England. "They lend the buildings a Hollywood glamour, accentuated by elements of art-deco design such as the over-scaled building numbers used as canopies over the main doors (now removed)."

This collection of warehouses and offices with a scalloped roofline by John Outram is another early example of the movement completed in 1978.

"The facades are almost completely flat, so the interplay between windows and frames and brick and concrete reference trompe l'oeil," said Historic England.

Sainsbury Wing at the National Gallery by Venturi, Rauch and Scott Brown (Grade I)

The National Gallery wing, built in 1988-1991, is listed as the only building by Robert Venturi, John Rauch and Denise Scott Brown in the UK.

"The Grade I listing for the Sainsbury Wing is in recognition of the exceptional design and the fact that the building is regarded as one of the career highlights of the founders of postmodernism," said Historic England.

Stained-glass windows and oak panelling retained from the former home of the organisation and incorporated in Sam Lloyd's hall for a medieval guild of brass craftsmen, which was completed in 1990.

"Lloyd drew on multiple styles as well as the context of the site and the history of the Founders. Lloyd's design fused a 'neo-vernacular' style with its focus on traditional materials such as brick, with Arts and Craft influences in the layering of materials, as well as references to the design of guildhalls of the 15th and 16th centuries," said Historic England.

The 48-home Belvoir Estate was designed by Islington Architects' Department as public housing and was completed in 1987.

"Geometric shapes recur throughout: the squared grid pattern occurs in the glazing of doors and conservatories and in the screens to the first-floor lobbies, the semi-circle, in the plan form of lobbies and balconies and as cut-out profiles in parapets and walls," explained Historic England.