British architect David Chipperfield has upgraded the Royal Academy of Arts in London, with a concrete bridge that connects two buildings, a new auditorium and renovated galleries.

To celebrate the 250th anniversary of the institution, David Chipperfield Architects has rejuvenated the Royal Academy's (RA) "unloved building" at 6 Burlington Gardens and connected it to the institution's main building, Burlington House.

As a result, the RA now has an exhibition space permanently dedicated to architecture –  a first for the institution.

"The project grappled with two fundamental questions – how do you convincingly connect these two buildings and how do you give purposeful identity to what happens in this building [Burlington Gardens]," David Chipperfield told Dezeen during a tour of the building.

Previously entered from a separate entrance, the 19th-century Burlington Gardens building sits directly behind the institution's main property in Piccadilly.

The former home of the Civil Service Commission, the British Academy and the British Museum's Museum of Mankind, the Grade-II listed building was purchased by the RA in 1991.

The renovation has greatly expanded the amount of publicly accessible space for exhibitions in the building. But one of the biggest challenges was how to connect the building both ideologically and physically to the RA's main property, Burlington House. An enclosed concrete bridge was the chosen solution.

Chipperfield described the renovation as a series of interventions that are designed to bring the best from the historic building and fully connect it to the RA.

"It wasn't a project that you had to land big ideas on," he said. "It's a masterplan made of small pieces. There are very diagnostic, punctual interventions as oppposed to a large overall drawing."

"The most punctual intervention, clearly, is connecting the two front doors," he added. "The question is do you go down or do you go up."

To avoid taking the route through gallery spaces, as was proposed in a previous design by Hopkins Architects, Chipperfield chose to link the buildings at ground level.

The public route that connects the buildings leads down the stairs at the back of Burlington House into a vault, which was previously a storage space but is now a public gallery. 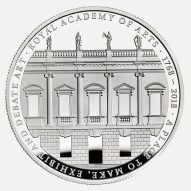 The route then passes through a former studio of the Royal Academy School, before heading up a flight of steps and across the bridge into the Burlington Gardens building.

"There's a down-vale, over-hill quality to it," said Chipperfield. "On paper its torturous – I'm hoping that experientially its not so bad."

Under the bridge, an outdoor courtyard that will be shared by the school and the RA's staff has been created.

"It had been eroded over time – no-one had loved it. Everything had been compromised in it. No-one really liked the building any more," said Chipperfield.

"People felt it needed substantial modification. Our feeling was it didn't. It needed a bit of care and attention, and a bit of love," he continued.

"We were fairly convinced that underneath, although it may not become the most beautiful building of this period, but it is certainly a substantial building with good spaces."

The building's grand staircase and circulation spaces have been restored, with the tiles on the floor of the first floor landing replaced.

The first floor houses a renovated gallery that is now the home to the RA's permanent collections, including an early copy of the Last Supper, painted by one of Leonardo's students around 1520.

The three top-lit galleries, which previously hosted the Richard Rogers Inside Out exhibition, have also been renovated as part of the project.

Also, on the first floor, a cafe and bar has been built in the restored Senate Room, with colours chosen by conservation architect Julian Harrap.

This room stands alongside the Architecture Studio – the RA's first space entirely dedicated to architectural programming, which replaces the former exhibition space on a ramp at Burlington House.

The 250-seat auditorium is the most visible new intervention in the Burlington Gardens building, and is called the Benjamin West Lecture Theatre.

The day-lit space, which can be darkened throughout the use of blinds and a blue curtain, will be used to host public lectures and talks, as well as RA meetings.

To create space in the building for the auditorium, David Chipperfield Architects removed the Wolfson British Academy Room.

But as this room is included on the heritage listing, it had to be deconstructed without damage. Its wooden panelling and moulded ceiling were then rebuilt in a new concrete extension.

David Chipperfield ranked at number 42 on Dezeen Hot List 2017. He has worked on a range of prolific museum projects, including the Museum of Modern Literature in Germany, Museo Jumex in Mexico and the upcoming Nobel Center in Stockholm.

Along with renovating the RA, the architect has also designed a commemorative coin to mark 250 years since the institution opened in London.