Canadian studio Diamond Schmitt Architects has completed a new home for the Emily Carr University of Art & Design, which features white facades that are meant to evoke a blank canvas.

Located just east of Downtown Vancouver, the building serves as the new "campus" for the 93-year-old arts institution that formerly was located on Granville Island. The university is named after the late British Columbian artist Emily Carr, who was known for her modernist and post-impressionist paintings.

The multi-storey building sits within False Creek Flats, an area that is undergoing revitalisation. Encompassing 290,000 square feet (26,942 square metres), the sizeable facility contains a range of programmatic zones, from studios and galleries to informal gathering spots.

"This purpose-built facility anchors the regeneration of an industrial zone and is a catalyst for its redevelopment and connection with the city," said Diamond Schmitt Architects, which was founded in 1975.

The building has several principal entrances, each with corresponding plazas. In one outdoor space, a large digital screen projects artwork by students and faculty.

"To engage the community of this emerging cultural and academic precinct, the campus has an open and accessible design to create a destination that welcomes the public into the creative processes on display," the team said.

For the facades, the team set out to evoke "the possibilities of a blank canvas". Exterior walls are clad in glass and white metal, along with back-painted glazed panels in a range of colours. The hues were chosen by artists Landon Mackenzie and Ben Reeves, who serve as faculty members at the university.

"The pair created a palette of 15 colours to reflect and honour the work of our namesake and renowned BC painter, Emily Carr," the team explained.

Inside, a wide central concourse runs through the facility, forming a horizontal link between major zones. A series of atria bring in natural light and provide vertical connections between the different programmatic areas.

"The atria also create intensive interchanges where informal gathering, making and remaking, and creative display give full expression to the university's approach to multidisciplinary arts learning," the studio said.

Many of the interior spaces have an industrial aesthetic, owing to concrete flooring and exposed ductwork. The team used ample glazing in order to provide views of the creative process.

"The character and materiality of detailing are willfully designed to be robust and resilient to support sustained creative production, while being raw and unpretentious to encourage innovation and experimentation," the architects said.

The team incorporated Aboriginal influences throughout the building, which "symbolise the university's comprehensive commitment to Indigenous arts programming". 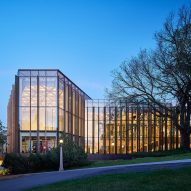 "Active participation by a vibrant Aboriginal community is fostered in spaces that embrace traditional and contemporary Aboriginal design elements in the architectural tradition of a Coast Salish longhouse," the studio said.

The building was designed to achieve LEED Gold certification from the Canada Green Building Council. Sustainable strategies include stormwater recycling and efficient mechanical systems. Wood was used for the structural system and for finishes, which responds to the government's Wood First Act, which requires publicly funded projects to use timber as a primary construction material.

Diamond Schmitt Architects is a Toronto-based firm that also has offices in Vancouver and New York City. Other projects by the studio include the overhaul and expansion of a brutalist arts centre in Ottawa, and the design of a concert hall in Texas that commemorates American musician Buddy Holly.