The late Will Alsop wasn't always right, nor was his work always great – but his wild imagination and generous spirit were much needed in British architecture, says Sam Jacob.

It's 4pm, at Will Alsop's office in Battersea. Someone says "Tea?". Then the man himself walks in: "Tea? G&T more like!". And as the green bottle of Gordon's arrives, the meeting changes gear. Suddenly the professional becomes personal, the conversation widens, people laugh, pens move faster over bits of paper and the meeting spills downstairs to a restaurant and into the night.

This was in the early days of Urban Splash's New Islington project where, in a freak of nature, we at FAT had been selected by a group of residents to design their new homes. And under the twin visions of Will as masterplanner and Nick Johnson as Urban Splash's own visionary, sharp hair-cutted instigator, a very special idea of how to make a city was taking place.

This was place-making avant la lettre. Place-making not as it has come to mean, with its tick-boxed management, cause-no-offence design, and bland platitudes.

New Islington was about how to make somewhere through imagination, with real engagement with real people in a real dialogue, all geared to making somewhere better in ways that we could never imagine in the first place. Here, neatly leveraging a large European Union grant to regenerate Manchester's Cardroom Estate, another world was, it seemed at least, possible.

Will was proposing plans for neon-ringed Tuscan hill towns for Barnsley, and Marge Simpson's hairdo and Kerplunk as a possibility for the old docks at Middlehaven

Will was at the time riding high in the UK. The optimism of regeneration was at its peak, as the pre-Iraq New Labour government pushed its progressive urban agenda. And Will somehow became the standard bearer for this drive for brownfield reinvention. In these favourable conditions, Will was proposing plans for neon-ringed Tuscan hill towns for Barnsley, and Marge Simpson's hairdo and Kerplunk as a possibility for the old docks at Middlehaven.

It's hard to remember how good that all felt now that so much has changed. Since the financial crash, many of these project stalled, often leaving strange semi-built landscapes of undisturbed post-industrial tundra sporadically punctuated by outcrops of strange architectural forms. These are now places that speak of a history of hopes and dreams, but incidentally would make perfect locations for a new breed of 21st-century British kitchen-sink dramas.

And now? A decade of Tory austerity has turned the contemporary public commons completely over to the corporate realm, which has little interest in imagination or generosity.

In line with economic and political changes, contemporary architecture has backed itself into a corner, burying its imagination beneath a veneer of pseudo vernacular-moderne in an effort to gain acceptability to clients and planners, while subjugating the possibilities of design to make a better world to the private interests of developers.

Post-Iraq, as New Labour fell from grace, these kinds of projects became retroactively compromised for some, both for their association with Blairism and their reliance on the market. For this new generation of politically and socially engaged critics, their ideologies weighed down the possibility of imaginative futures. And Will’s – the boldest and most prominent – stood right in the firing line. 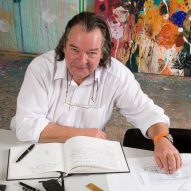 These changes, on both left and right of the political spectrum, meant that Will’s attitude and aesthetic fell out of step with British culture.

Boiling down the politics of architecture to an ideologically pure state means sidestepping the often messier, more complex and far more interesting way ideologies shape our cities and our buildings. Just as it is a perversion of the possibilities of design to expend its energies on simply making things acceptable. Will stood for something else. Not necessarily coherent, yet always proposing at least the possibility of an alternative.

In a typically backhanded quote from Rem Koolhaas, he might not be a breath of fresh air, but at least he's a breath of air

This isn't to argue that Will was necessarily right, or that all his work was great. But importantly he stood for something else.

He enjoyed what one might describe as a cavalier attitude to "career". Bankruptcies, takeovers, venture capitalists and the shuffling of collaborators, he lurched from crisis to crisis without ever sinking below the surface. It was of a way of operating that blew apart the modern professional architecture outfit, where the business of professionalism gets in the way of the business of architecture. Instead, Will's public pronouncements were an authentic voice. He wasn't always right, but that's not the point. He was real, sincere and always intended to provoke something "better" rather than take someone in.

Somehow Will managed to connect ideas and people in a way few, especially in architecture, can. He was, despite speaking like the Fast Show's Rowley Birkin QC, able to speak and listen to everyone and anyone. In a typically backhanded quote from Rem Koolhaas, which says more about his opinion of British architectural culture than Will himself, he might not be "a breath of fresh air, but at least he's a breath of air".

As an inheritor of the visionary-ness of Cedric Price (who he worked with) Will carried a torch for a certain strand of British avant-gardism. Yet he managed, like none of those forebears, to build a lot. Some shlock, of course, but then who hasn't?

Some of his projects are incredible. Take the Sharp Centre in Toronto, whose insane premise placed a chequered slab way up high above the city, accessed by an escalator of vertiginous length – an architecture both of ridiculous imagination and ultimate gesture. But at more modest scale, his Fawood Children's Centre shows another kind of invention. Surely an inheritor of Price's Interact Centre, this mesh-framed building responded to the lack of budget by reducing the amount of redundant enclosed inhabitable space that architecture usually generates. Instead, if offered the kids an outdoor landscape to explore, while insulated by custom puffa jackets. So ridiculous, so sensible.

Will was different. He was open to talk, to pushing things through, making connections, fighting other people's corners

In other words, when so much of the built environment is designed through presets and standards, Will had the balls to think differently. It wasn't for everyone of course. One chief exec commented that, when asked to design a public square, he proposed a school instead. She might have found that arrogant, but Will's ability to provide a difficult question to an easy answer will be sorely missed. So too will his generosity.

It's a strange phenomena that the baby-boomer generation of architects lacks a sense of openness to younger British architectural culture. They pulled the ladder up sometime around 1985. But Will was different. He was open to talk, to pushing things through, making connections, fighting other people's corners. His generosity started with the personal spread outwards to architecture and the city itself. Perhaps there should be a litmus test – no public projects should be awarded without that generosity of spirit.

Ten of Will Alsop's architectural highlights

I can't begin to describe how lonely it was for FAT in the late 90s and early 2000s. Or how different British architectural culture was. Our only work came from across the North Sea in the utopian architectural land of Super Dutch. But Will helped us to break ground back home. He wasn't exactly a mentor, more an amused bystander thinking: "Why not let them have a go?". Without him our social housing project in New Islington might never have made it over the line. And without him insisting on our inclusion on a big team comprising the great and the good, our CIAC housing project in Middlesborough, would never have happened.

Sam Jacob is principal of Sam Jacob Studio, professor of architecture at University of Illinois at Chicago, director of Night School at the Architectural Association, and the editor of Strange Harvest. Previously, he was a director of internationally acclaimed architecture practice FAT.
Read more: