New York architect Rafael de Cárdenas has transformed a tired apartment in a 20th-century brownstone into a home for himself, featuring "multiple living rooms of varying moods".

The brownstone property in the Clinton Hill neighbourhood was built in 1889. Despite the building being in poor condition, locally based Cárdenas was drawn to its ornate Victorian-era fixtures such as ceiling mouldings, millwork wall panelling, wooden doors and frames.

"When I found the place, it was pretty rundown, but I thought it had the right original details," de Cárdenas told Dezeen.

"I needed to renovate just to sort of clean it up, but in general, I liked the spaces and how they flowed from one to the next, and responded well to the Victorian moulding, wood work and plaster work."

To help with the refresh, the architect enlisted Adam Charlap Hyman, a fellow Rhode Island School of Design graduate and principal of local architecture and design firm Charlap Hyman & Herrero.

The duo reconfigured the interiors to create a series of rooms suited to Cárdenas's daily tasks. Among the main changes was the removal of walls that previously separated bedrooms to form a single space for a media room.

The other areas include a kitchen, a dining room, a space filled with plants, and a master bedroom that
de Cárdenas described as "multiple living rooms of varying moods".

"I feel quite luxurious having different rooms that suggest varying uses and behaviour," he said. "I use almost all every day at different times; the plant room and kitchen in the morning, the dining and media rooms in the evening." 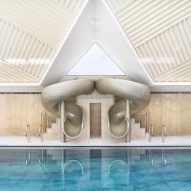 The duo painted the entire property white, including all the original features, walls, doors and frames. De Cárdenas said the stark refresh reminds him of the apartments built in Paris during the second half the 19th century.

"I can't say I naturally gravitate towards Victorian, but I thought all the moulding in white slightly referenced a Haussmannian Paris interior, just slightly," he said.

De Cárdenas and Hyman left some of the ornate fixtures untouched so that they can continue to age and patina. Many existing features of the property were preserved, like weathered wooden flooring, a fireplace with a green-tiled surround, and arched sills built into the walls.

The existing cabinets in the kitchen, which feature an ornamental profile on its underside, were also restored and painted white, and then paired with new monochrome tiling.

Colour is brought in elsewhere in the house through furniture and artwork. A red piece of art contrasts the otherwise neutral decoration in the dining room, where the white table is set atop tubular plastic legs and chairs are covered in pale leather.

Wicker benches are placed in the greenery-filled room, while more neutral tones of pale pink and purple can be found in the media room.

De Cárdenas' bedroom is particularly stark, featuring an all-white bed frame, bedding and curtains, and a matching bubbly pendant light and artwork in monochrome. Hints of blue and red are provided by a chair and decorative pieces on the bedside table.

De Cárdenas founded his multi-disciplinary practice Architecture at Large in New York in 2006, and works on a range of projects from installations to house extensions.

His most recent include adding a pool house with symmetrical slides to English country manor and a maze-like installation currently on show in New York.

Photographs are courtesy of the Wall Street Journal Magazine, which first featured the project on 5 May 2018.