The home is located near Mont Tremblant, a popular holiday location known for its natural landscapes. The clients own a horse farm on the remote site, and wanted to add a home and ceramics studio.

"European stables and horse-breeding centres were among the references explored during the initial design phase," said Atelier Barda, co-founded by Antonio di Bacco and Cécile Combelle.

The dense forest surrounding the Gauthier Residence makes the building invisible from the road. The approach culminates at the main facade: a monumental brick wall with a single off-centred arched opening.

Through this entrance is a corridor that separates the two wings of the asymmetrical V-shaped plan. One wing contains a three-car garage and the owner's ceramics studio. The other accommodates the domestic spaces.

"The sequence marks a division between the service areas, the artist's studio, and the more intimate family space," Atelier Barda said.

These distinct areas are connected by the curved corridor, with a low ceiling that is intended to highlight the differences between each space. From the arched foyer, this narrow hallway leads to the home's expansive main room.

The gabled volume features large west-facing openings and contains the kitchen, living, and dining areas of the home. Even more light is brought into the space by east-facing skylights carved from the massive roof. 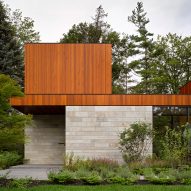 A storage wall runs along the eastern side of the common areas, dividing them from the home's living quarters. This allows the owner to display artwork and other objects on open shelves, as well as storing day-to-day items in cupboards.

Two bedrooms are located along this side of the home and face the inside of the V-shaped plan, providing more privacy. A small study and mezzanine sits between the two bedrooms, and is accessible by a ladder.

According to the architects, the client's interest in minimalist American painters and her ceramics practice informed the design of the home.

Simple sculptural gestures such as a curved fireplace, angled skylights, and rounded corners complement the restrained material palette of the home.

"The geometries converse with the impressive body of the existing farm, at the same time making their mark in the natural surroundings," said Atelier Barda.

The huge gabled roof is covered in a black metal cladding. At its peak, it rises to a height of 21 feet (6.4 metres), while its edges are only seven feet (two metres) tall.

Pitched roofs are commonly found on rural Canadian homes, as they reference traditional building forms. Other examples include a house covered in white cedar boards by YH2 and a ski lodge in Ontario by Atelier Kastelic Buffey.

Photography is by Maxime Desbiens unless indicated otherwise.