In this competition, five Dezeen readers can win a signed copy of a book celebrating the "evolution" of US architect Jim Olson's buildings over his 60-year career.

This competition is now closed. Congratulations to the winners, which are Chase Nantze from Albany, United States, James Hunt from Leicester, United Kingdom, Amy Gaddis from Colorado, United States, Daniel Valero from Querétaro, Mexico, and Josi Azevedo from Lisboa, Portugal.

Five readers will each win a copy of Building, Nature, Art – a new book that follows six decades of work by Olson, who is the co-founder of Seattle architecture studio Olson Kundig.

Published by Thames & Hudson, the 324-page publication presents the architect's range of works, from Capital House, which was completed in 2008, to Denver's Kirkland Museum of Fine & Decorative Art, which opened this year.

It also includes Olson's very first project: a bunkhouse he built for himself in 1959 and then extended in stages over the years, with the most recent addition completed in 2014.

Architecture critic and Dezeen columnist Aaron Betsky describes the project called Longbranch Cabin "as a record of his evolution as an architect" in the book's introduction. 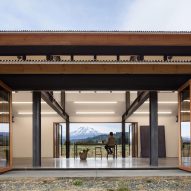 In this essay, A Pergola in the Woods, Betsky tracks Olson's career, including his design education at the University of Washington, and influences from Northwest American architects Paul Kirk and Ralph Anderson.

Throughout the book, featured projects are separated into sections titled Nature, Influences, and Functions of Space. Each work is accompanied by a commentary from Olson, as well as photography, amounting to 400 images in total.

Many of the projects are residential, as Olson is best known for his houses. They include a Mexico beach house designed for a high-school friend, a residence set in Californian woodland and an extension purely for parties.

But the architect also describes how he translates his homey style for much bigger ventures, like a sprawling hotel resort in Baja facing the Pacific Ocean.

A coloured glass chapel for a 1950s church in Seattle and a museum with a huge curved wall of glass are also among other standout designs.