Hiroe Tanaka, creative director of the Trunk Hotel in Tokyo, explains how the building was designed to become a hub of activity, in this movie filmed by Dezeen at the AHEAD Asia hospitality awards.

Trunk Hotel is a small boutique hotel located in Tokyo's Shibuya district. It won the New Concept of the Year prize at the AHEAD Asia 2018 hospitality awards earlier this year.

Tanaka says the hotel is unusual for the Japanese capital because it is intended to appeal to the local population as much as international guests.

"In Japan, the concept of a boutique hotel didn't really exist," she explains in the movie, which Dezeen filmed in Singapore for AHEAD.

"There were only luxury or business hotels in Japan. So, for us, creating a completely new type of hotel was important. We wanted to create a hotel that is accessible to the people of the town and will attract a wide range of guests." 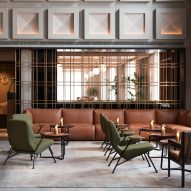 There are only 11 single rooms and four larger suites in the hotel, but it includes a host of public spaces, including a restaurant, a bar, a convenience store selling local produce and even a chapel. A casual restaurant serves grilled meat and vegetable skewers by the hotel entrance.

Tanaka says the aim was to generate a lively atmosphere by creating spaces where locals would want to spend time alongside hotel guests.

"In Japan, people don't normally stay at hotels unless it's a special occasion like an anniversary," she says.

"The concept of this hotel is socialising. If you stay at the hotel, you can find many different types of Tokyo people. That's one way of feeling part of Tokyo, I think."

This movie was filmed at the Andaz Singapore Hotel in Singapore for the AHEAD Awards. All photography is courtesy of Trunk Hotel.

More from AHEAD Awards