Architect Frederic Schnee has modernised and extended a traditional house in Beijing by moving the courtyard onto the first floor so a shop can be accommodated at street level.

The original building is a typical example of a self-built residence that had undergone multiple adaptations over several decades in response to the changing needs of its occupants.

Schnee conducted a comprehensive analysis of the building's evolution and the general history of Beijing's vernacular architecture before setting about the process of modernising the site.

The research showed that, in 1959, the site was occupied by a simple house constructed in the traditional way with two rooms arranged on either side of a common central space. This main building was demolished and rebuilt twice in the subsequent decades.

A series of extensions and new additions erected in the yard gradually transformed the property into a courtyard house reminiscent of a Siheyuan typology that is common in Beijing's hutong districts.

Schnee's project began with the removal of the various structures from the courtyard. This left just the main hall, which was last reconstructed in 1997.

The new extension replicates the typical courtyard format, but elevates this combination of open space and surrounding rooms onto the upper storey.

"One of the most important characteristics of the courtyard house is its flexibility in accommodating growth and change," explained Schnee.

"The objective was to build a new courtyard house, by lifting the courtyard and creating a space for a convenience store on the ground floor." 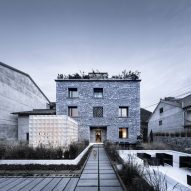 The ground-floor level was lowered and a new concrete slab was poured inside the existing building to create an additional storey.

Foundations were excavated in the courtyard to support the reinforced-concrete frame of a two-storey extension containing the store on the ground floor and accommodation above.

A typical grid of columns forms the structure, which was then filled in with brick before the facade was added. The columns are arranged according to traditional room layouts and the principles of Feng Shui.

Photography is by Frederic Schnee.