A staircase featuring a mirrored balustrade now leads up through this home in Montreal, renovated by local architect Jean-Maxime Labrecque.

Called Playful Tudor, the project involved the transformation of a residence in the Canadian city, which was originally completed in a style that references the historical Tudor period from 16th-century England.

Labrecque's firm, INPHO Physical and Information Architecture, was enlisted by a young family to convert the "dark and stifling" house into a more welcoming setting.

Among the main changes was the restoration of the home's central staircase, which now features a smoked-bronze mirrored handrail that extends up to the first floor. A bathroom slots underneath the stair on the ground level in a volume covered in the same reflective material.

Minimal finishes added throughout the residence – including white walls and pale wooden floors – allow the bolder features to stand out. 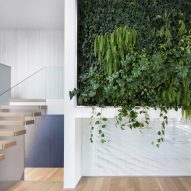 Other changes to this floor included the removal of partitions between the kitchen and dining room to create an open-plan living area. Part of the floor was also demolished at the rear, to extend the room down into an existing half basement with stepped seating.

"By eliminating half of the living room's floor, a crawl space is put to use to generate a double-height amphitheatre," said Labrecque in a statement.

On the next level are the bedrooms for the home's owners and two children. The former are located at the front of the house, while the latter face the back yard.

Each of the children's bedrooms has a dressing area and a work desk. A lofted sleeping area is located above, and accessed by black ladder steps that are cantilevered from the wall.

"The kids access these beds by climbing ladders made of floating rungs that have been inserted into the dividing wall," said the architect. He also noted that although the kid's beds were at the highest point of the house, they were secured by transparent acrylic railings to prevent falls.

A family bathroom shared by all the residents occupies a large room with two windows in between the bedrooms.

Formerly a bedroom, the room now features a multi-function white central island that incorporates many of the necessary washroom elements.

Labrecque's firm completed the project in 2016. Other residential renovations in Montreal include the refresh of a unit in the city's iconic Habitat 67 building by Rainville Sangaré and an intervention by local studio naturehumaine, who added a plant-filled wall to a mid-century residence.

Photography is by Frédéric Bouchard.