A sliding screen offers glimpses to the living room beneath this plant-filled wall, which architecture firm Nauturehumaine has added to a 1940s house in Montreal.

The local studio renovated the mid-century property in the Canadian city's residential Outremont borough for a couple and their two children.

At the request of the wife, who works in the environmental and health field and has a keen interest in wellbeing, a green wall was created as the centrepiece of the home.

To accommodate the feature, the firm extended the upper lounge – which is raised above a garage beneath –into the attic, forming a double-height space for the foliage to grow up.

Encased in a white frame, the greenery is elevated above the ground floor to provide a gap for a window beneath, which offers views between the two living areas. A white steel screen perforated with a "wavy motif" slides in front of the opening to provide privacy when necessary.

"We decided to create a visual link between the two spaces by introducing an opening animated by a steel laser-cut sliding panel that could bring intimacy to the living room when needed," Nauturehumaine architect Stéphane Rasselet told Dezeen.

The firm reconfigured the rest of Courcelette Residence to create plenty of light and few divisions between different spaces. An open-plan kitchen and dining room accompanies the lounges on the ground floor, while two children's bedrooms, a master bedroom, two bathrooms and a study occupy the first floor.

A new staircase connects the three levels, transitioning from wooden steps from the lower living room into cantilevered treads at the top. The stairs comprise steel plates covered with solid white oak.

Matching wood boards cover the floors across the residence and complement white-painted walls as part of a simple and neutral material palette. This can also be seen in the bathrooms, which are lined with grey tiles.

Contrasting these muted tones, a series of boxes clad in blue-painted fibreboard panels are used to hide rooms and reduce clutter. A large volume on the ground floor conceals the entrance and washroom with bookshelves on the exterior, while a smaller box contains shelving on the first floor.

"To give the illusion of lightness to the spaces we concealed certain loadbearing elements into a number of box-like modules identified by a specific colour," said Rasselet.

For the kitchen, the firm chose to cover the Russian plywood cabinets in grey and white laminate. A glass splashback runs along the countertop is imprinted with a musical piece chosen by the clients. 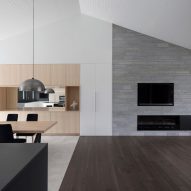 The residents can dine at either an angular white quartz top, which wraps over the kitchen island to form a breakfast bar, or a wooden dining table.

On the exterior, Naturehumaine restored the existing brickwork of the mid-century property and made few changes to the exterior openings. The main intervention is a 26-foot-long (eight-metre) set of sliding glass doors that open from the kitchen and the back garden.

The architects removed part of the rear masonry wall and added a steel beam for support. The metalwork now forms a canopy above the terrace lined in red cedar.

Above the large opening, the two existing windows into the each of the children's bedrooms on the first floor were also replaced with one window. The architects describe the arrangement of the openings as having a "face-like appearance".

A grey-and-black extension to a 1920s brick house, an angular two-storey addition on a 1860s light stone dwelling, and a white rooftop unit built onto a 1920s brick apartment building are also among the studio's portofolio.

Photography is by Adrien Williams. Video is by David Dworkind.