The brutalist style Roman Catholic Cathedral Church of SS. Peter and Paul was designed by Ron Weeks of the Percy Thomas Partnership, with input from the Vatican, and completed in 1973.

A congregation of up to 1,000 can assemble around its high altar, and the narthex contains two stained glass windows made from 8,000 individual pieces of glass. It was given listed status in 2000.

Although it was praised at the time for its minimalist design and unusual hexagonal plan of the sanctuary, Clifton Cathedral was never fully watertight and 45 years of leaks had caused considerable damage.

Purcell began the £3.1 million repair process in 2015, with the Cathedral remaining in use throughout the entire process – hosting eight masses a week along with baptisms, weddings and funerals.

Up on the pitched roof, 86 tons of lead were replaced. Internally, the funding conditions specified that Purcell had to open up parts of the building that had previously been unaccessible, including the gallery over the baptistry and opening up a sealed-off staircase.

Part of the classic Brutalist aesthetic is the cathedral's concrete form, which Percy Thomas Partnership had originally board-marked with planks of coarse-grained Russian Redwood. Purcell took care to retain this particular element when repairing the water damage.

"Our conviction was for the building to become watertight, and safe and open for use, but also not to lose any of its rigour and quality as a superb exponent of the late Brutalist era," said Clifford Martin, a partner at Purcell's Bristol office. 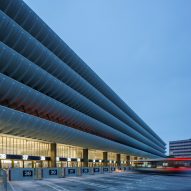 "The works have been undertaken with the intention to both repair and protect the building, and to magnify and celebrate its original design and detail," he added.

"The Cathedral, in common with many buildings of its type and era, was built in difficult times. Our aim for the repairs projects was, at all times, to consider what the intent for its design and execution had been in order to remain true to the building's principles."

The new roof has been slightly modified from the original design to address the leaks, but Purcell worked closely with the Lead Sheet Association to create long-lasting work that matched the building's historic aesthetic.

To find the source of the leaks in Clifton Cathedral's concrete cladding Purcell had to delve into the archives and examine the original drawings.

The architects studied how the cladding had originally been constructed and how the joints behind each panels had been made.

They were then able to repair areas where pieces had flaked or chipped off using Corennie granite chippings that matched the original materials used.

Water and draughts had also been coming in through the wire mesh glass where panes had slipped from their frames, so a new system of self-cleaning, thermally-broken glass was installed.

The original lighting plan for the place of worship was never been fully realised, so Purcell replaced the lights with fully dimmable, ultra-bright LEDs with assistance of consultancy Lighting Design and Technology.

Consultants Method were bought in to upgrade the heating system, and the entire building was re-wired to make it safe. The Cathedral is now a dry, warm and well lit space for worshippers and visitors to enjoy.

This year has seen a number of Britain's important pieces of listed architecture undergo essential refurbishment and modernisation works.

John Puttick Associates has just completed its renovation of Preston's iconic Grade II-listed Brutalist bus station, and DSDHA has unveiled the first phase of its refit of the Grade II*-listed Smithsons-designed Economist Plaza.

Richard Seifert's Grade II-listed Centre Point has also been restored and converted from offices into luxury flats by Conran and Partners.