Japanese studio Nendo has created a children's picture book that tells the story of a cup trying to solve the problem of not having a spoon.

Titled What is a cup?, the book aims to explain how creative design ideas are born.

Once the mug notices that it doesn't have a spoon to stir coffee and milk, it tries to solve the issue by changing itself into various different forms.

Among its many changes the cup morphs its flat base into a cone shape, so it can spin on its axis and mix the liquids together inside itself.

It also stretches itself out so that it has two openings, to be able to add coffee and milk respectively into each side that will blend in the middle.

The studio explains, the moral of the story is to emphasise that design is "not only about creating beautiful shapes, but about recognising the little inconveniences in our everyday lives, and finding new ways to solve them."

"The overall message of the book is that even the smallest and seemingly boring things in our daily routine can enrich our lives and excite us when given a bit more attention," said Nendo. 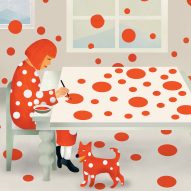 Sato told Dezeen that he wanted to create a children's book to convey a message to parents – to "be open to their children's unique imagination, their development of creativity, and to nurture the ability to look at things from a different point of view."

More than twenty physical objects recreated from the book illustrations were showcased in an exhibition celebrating the launch of the book, which took place at the Tsutaya Electrica store in Tokyo from 23 May to 10 June 2018.

The book, which was released in April 2018, is available in stores in Japan.

The life and works of Japanese artist Yayoi Kusama was also recently documented with painterly illustrations in a children's book by illustrator Ellen Weinstein and MoMA curator Sarah Suzuki.

The book, titled Yayoi Kusama: From Here to Infinity!, gives children the chance to read about the artist's journey to success.