Engineers from MIT have designed soft, 3D-printed structures that can transform their shape "almost instantaneously" with the wave of a magnet.

The magnetically manipulated objects are made using a type of 3D-printable ink developed by researchers at the Massachusetts Institute of Technology (MIT), which has been infused with tiny magnetic particles.

When they come in contact with a magnet, the 3D-printed structures can be made to crawl, roll, jump, and play catch within fractions of a second, like "marionettes without the strings."

Among the collection of shape-shifters is a smooth ring that wrinkles up, a long tube that squeezes shut, and a sheet that folds itself.

A spider-like "grabber" is also included in the group, which is able to crawl, roll, jump and snap together quick enough to catch a passing ball. It can even be directed to wrap itself around a small pill and carry it across a flat surface.

Associate professor at MIT Xuanhe Zhao, and his fellow researchers, created the objects by fitting an electromagnet around the nozzle of a 3D printer, causing the magnetic particles in the ink to swing into a single orientation as it is printed.

This method enables the engineers to continuously control the orientation of the magnetic particles when printing sections of a structure by simply reversing the direction of the electromagnet.

"By controlling the magnetic orientation of individual sections in the structure, the researchers can produce structures and devices that can almost instantaneously shift into intricate formations, and even move about, as the various sections respond to an external magnetic field," explained MIT.

Its developers hope that this new printing technique of the "flexible yet strong" structures could soon be used to develop remotely controlled biomedical devices.

"We could put a structure around a blood vessel to control the pumping of blood, or use a magnet to guide a device through the [gastrointestinal] GI tract to take images, extract tissue samples, clear a blockage, or deliver certain drugs to a specific location," explained Zhao.

Other groups have created similar, less advanced, devices by mixing a polymer solution with magnetic beads, and pouring the mixture into a mould. Once this material has set, a magnetic field is applied to uniformly magnetise the beads. 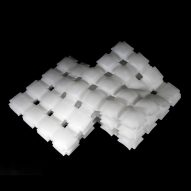 The MIT researchers' project is an advance on this technique as the team can print  structures that have magnetic "domains" – individual sections of a structure that each have a distinct orientation of magnetic particles.

This enables each section to move in a distinct way when exposed to an external magnetic field, meaning that the structures are able to carry out complex articulations and movements.

The magnetically activated structures are an example of "soft actuated devices" as they are formed from squishy, moldable materials that are designed to shape-shift or move by way of different mechanical methods.

They are similar to hydrogel devices that swell with a change in temperature or pH, or shape-memory polymers and liquid crystal elastomers, which deform in reaction to stimuli such as heat or light.

However hydrogels, shape-memory polymers and liquid crystal elastomers have slow response rates, and change form over the course of minutes to hours.

The magnetic structures could also be likened to pneumatic and hydraulic devices, which are activated when air or water are pumped into them, however these require tubes that connect them to pumps, making them inefficient for remotely controlled applications.

"People have only made structures that elongate, shrink, or bend," said researcher Hyunwoo Yuk. "The challenge is, how do you design a structure or robot that can perform much more complicated tasks?"

"There is no ideal candidate for a soft robot that can perform in an enclosed space like a human body, where you’d want to carry out certain tasks untethered," added fellow engineer Yoonho Kim.

"That's why we think there's great promise in this idea of magnetic actuation, because it is fast, forceful, body-benign, and can be remotely controlled."

MIT researchers also recently used 3D-printing techniques to create inflatable structures for use in car interiors. The stretchy, inflatable silicone prototypes could take on a number of different shapes depending on the level of air pressure inside.