Called Milk Ceremony, the installation sees the Central Saint Martins Product Design graduate extract proteins from waste milk to create casein, which could potentially be a biodegradable alternative to plastic.

The installation aims to show how a biodegradable alternative to synthetic plastic – which does not break down quickly and is widely considered one of the world's biggest environmental issues – can be created. By creating this potential  alternative Wang aims to draw attention to issues surrounding the use of plastic.

"The main aim of this project is to attract people's attention to overuse of plastic, convey disguised information to people and guide people to rethink and change their life and consumption habits and behaviours," Wang told Dezeen.

"The design language is elegant and poetic, uses the simplest way to express the understanding of nature which creates a quiet and harmonious atmosphere that allows people to deeply feel and think about the relationship between people and the natural environment," she explained.

In the tea ceremony Wang creates the casein by pouring milk and vinegar into a bowl, and stirred evenly for 30 seconds, before filtering out the excess liquid from the milk.

She then treats the residual substance with acid, causing the casein proteins to polymerise and form a solid mass. This mass is poured into a mould and left to harden for three days. 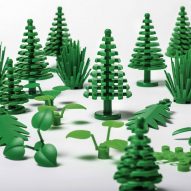 Lego to launch sustainable bricks made from sugar cane

The resultant product is a white, solid material that resembles the toughness and durability of synthetic plastic. The installation shows that there are alternatives to single-use plastics that have not yet been explored.

According to Wang, the casein will biodegrade and breaks down to half its original mass when placed in the soil for eight days.

Interest in alternative plastics as a raw material has been gaining momentum in recent years as concern over pollution increases.

Previously, Royal College of Art graduate Tessa Silva-Dawson also used cow's milk to create a natural alternative to plastic, while Lego is set to launch a range of botanical elements made from a plant-based plastic sourced from sugar cane, in a bid to reduce its plastic waste.

Elsewhere, IKEA has revealed plans to remove all single-use plastics from its product range by 2020, while the Indian government has committed to banning the material from the country by 2022.