New York-based Savvy Studio has designed a restaurant in the city themed on beachgoing and boating with striped cushions, chrome and wood.

Slated to open this month in Tribeca, the cafe is located on a corner lot with floor-to-ceiling windows that bring natural light into the space.

Summer Day Cafe is an Italian-American restaurant with nautical interiors, which were designed by locally based Savvy Studio. The restaurant has various seating areas that were specially designed for the project, along with subtle maritime details.

"The inspiration for the Summer Day Cafe started at the sea, with key elements from the ocean, sea travel, and classic uniforms being used throughout the cafe," said a statement from the studio, which also has an office in Mexico.

At one section of the restaurant is a galley-style eating area, flanked by high-top tables and yellow barstools. Exposyca wood counters and wooden table tops feature throughout, evocative of the glossy lacquer on wooden boats.

Many of the dining tables are wrapped in chrome, adding a marine feel, while bamboo shades and indoor plants add an element of rusticness. White walls and floors keep the space bright, allowing the nautical details to pop.

The main area, close to the windows, has a series of round cafe tables with white, wooden chairs and exposed beams overhead, also painted white.

Nearby is a set of upholstered booths with rounded backs that are reminiscent of classic sunshades and towels, with their black-and-white stripes. Tables rest on red-painted posts with similar chrome edges. 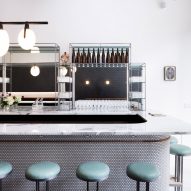 The half-moon booths are lined in rattan on the other side, while other built-in benches in the rear provide additional seating options for small groups.

In addition to crafting the interiors, Savvy Studio also designed the cafe's branding and illustrations. For the cafe's signage, a series of pictures with different typefaces and techniques were created.

Much of the details are based on the works of New York photographer Joel Meyerowitz, with his documentation of iconic beach scenery.

Found throughout are line-drawings of sea-inspired imagery, such as a group of seagulls high up on the wall in one corner, the back of a woman standing in the water on one window, and a melting ice cream cone on a walled section.

A small, dimly lit room has wallpaper with drawings of men and women playing and lounging at the beach, with other depictions of sailboats, beach balls, umbrellas and towels.

The colour scheme for the cafe, with its yellows, whites, and reds, also takes cues from a book by Meyerowitz – A Summer’s Day – that has cheerful images of beach life.

"The idea was to create a logo that isn’t just a beautiful design, but emotes a timeless personal feeling," said the studio.

Other recent restaurant projects in the New York City include the art deco and industrial details of Una Pizza Napoletana in the Lower East Side by Jordana Maisie, the wooden accents at De Maria in Nolita by MP Shift, and the colourful upholstered pieces at Primo's bar in Tribeca by Camilla Deterre.

Photography is by Savvy Studio.