Beeline has designed a stripped back navigation device for motorcyclists, which replaces visually complicated maps with a single arrow to direct bikers.

Created by London-based startup Beeline, the navigation tool works in a similar way to a compass. Attached to the vehicle's tank or handlebars, riders simply need to follow the direction of the pointing arrow to reach their destination.

The gadget, called Moto, is a development of the startup's existing navigation device designed for cyclists, which was launched in 2015 through design duo Barber and Osgerby's creative consultancy Map.

While the new version maintains the same minimal design, it introduces optimised features designed specifically for motorcyclists and scooterists, who travel at much higher speeds.

Addition features include turn by turn route guidance, full waterproofing and an improved mounting mechanisms to deal with the increased vibrations caused by faster travel.

Riders can follow their journey progress on the 30-millimetre-diameter screen, and track the distance of their next turn.

By eliminating the need for complicated maps and overly detailed instructions, Beeline believe the Moto makes the process of navigating on a motorcycle safer and easier as riders can focus on the road ahead rather than being distracted by technology.

"As motorcyclists ourselves, as well as cyclists, we fully appreciate the need," said Beeline co-founder Tom Putnam.

"Motorcyclists need clean, non-distracting navigation systems and that just didn’t seem to exist and certainly not at a reasonable price point."

Launched at the end of June 2018, the small, circular device includes a range of mounts that allow it to be attached to any bike's handlebars or tank. A twist-lock mechanism enables the unit to be clipped on and off the bike swiftly. 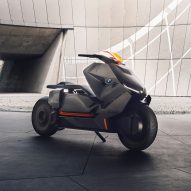 In comparison to ordinary sat-navs that have a battery life of around five hours, the Beeline Moto uses a 350 mAh (milli Ampere hour) battery that can last for up to 30 hours between charges.

The reflective display is designed to remain clear under bright sunlight, and the screen features an automatic backlight for night riding.

The device is controlled by an app that drivers use to plan and track their route, as well as log their past journeys to see how far and fast they've ridden.

According to Beeline, the underlying technology applies algorithms to both the phone and device sensors, which then points the rider in the right direction.

"It was the simplicity of the navigation in our first product that captured people's imagination. With Beeline Moto we've focussed on maintaining this level of excellence, while fulfilling the needs of motorcyclists," said Beeline co-founder Mark Jenner.

"Whereas the original cycling product simply pointed you at the end destination, like a compass, Beeline Moto gives the option of full route guidance," he added.

"It still uses that clear arrow to follow but now steering you along a precise route, which can be set up in a few taps on the phone. Compass mode is still available for off road riding."