Canadian company CycleLabs has launched a smart device for bicycles that is designed to help navigate and track routes, and prevent theft (+ movie).

Launched on crowdfunding platform Kickstarter, the SmartHalo attaches to the handlebars of a bicycle and pairs with a smartphone to offer cyclists multiple functions.

CycleLabs' aim was to combine global positioning system (GPS) navigation, activity tracking, and an alarm system into one device that fits onto any bike. 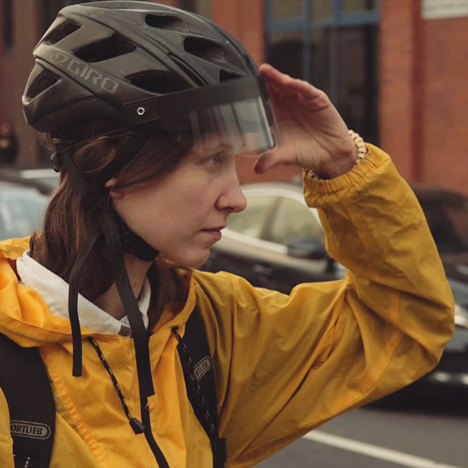 The design features a circular screen that displays information using a ring of lights. It powers up automatically when it detects motion and turns itself off when left alone.

"SmartHalo connects with your phone using Bluetooth Low Energy," said CycleLabs. "There is no on/off button: when the user is away, SmartHalo is in deep sleep mode. As soon as the user grabs its bike, the device wakes up, thanks to an internal sensor."

To access its GPS functionality, the user inputs their destination into the smartphone app. The suggested route is configured and transferred to SmartHalo, which indicates the direction to travel using the lights on the screen.

"Our design choices have always been focused on simplicity," said CycleLabs. "We think existing bike GPS are overly complicated, with a screen and maps and everything. We've chosen to go with a minimalist interface that allow our users to focus on what matters most – their ride."

Related content: see all of our stories about cycling accessories

Arcs of green light on either side indicate left and right turns, while a red semi-circle at the bottom prompts the rider to make a U-turn. The full circle illuminates in green when the cyclist has reached their destination.

The device tracks information about time, distance, elevation and calories burnt during the journey, which can be viewed on the accompanying app.

The SmartHalo also features a built-in alarm system. An internal motion sensor detects when the bike is being tampered with and emits a loud noise to warn off potential thieves.

Users are recognised by their phones to ensure the alarm doesn't sound when they are in close proximity. A custom tapcode can also be programmed into SmartHalo so the owner can manually turn off the alarm if their phone battery is dead.

Call notifications and weather alerts can be displayed on the screen, and an integrated headlight automatically turns on and off when necessary. Battery time is estimated at three weeks for normal usage.

"To charge, the user unlocks the product using a special key – it only takes a few seconds," said CycleLabs. "It can then be charged using USB."

According to the company, the device is completely weatherproof from sun, rain and snow. It incorporates a polycarbonate lens, with a thermoplastic case and clips.

Other companies have also recently explored how technology can improve cycling. For example, last December Volvo launched a prototype helmet that offers two-way communication between the wearer and nearby drivers to help prevent accidents.

More recently, a Royal College of Art graduate has designed bone-conducting headphones that clip to a cycling helmet so the wearer is still able to listen out for vehicles.