US architecture firm Studio Gang has unveiled its first project for Canada: a Toronto skyscraper made up of stretched hexagonal volumes topped with terraces and planters.

The One Delisle skyscraper is proposed for the Canadian city's Deer Park neighbourhood, on the corner of Delisle Avenue and Yonge Street – a major arterial route that runs north-south. The plans are for a mixed-use development, with shops at ground level and residences above.

Aiming not to shadow the street level, Studio Gang has designed a fragmented composition, creating setbacks that allow light to filter down. It comprises eight-storey-high volumes that are each shaped like a distorted hexagon, and piled together to resemble a stretched honeycomb.

The volumes would taper outwards towards the top as a way to shade the residences, which would be fronted by glazing. The stacked arrangement would create planted outdoor areas for the residents.

Some volumes would also be fronted with covered terraces to be used in the shoulder seasons, before the city's much colder winter.

"The geometry of the facade, and the self-shading it provides, allows each living space to stay cool in summer, while also optimising winter light," said the firm's founder Jeanne Gang in a statement.

"This gentle pitch frames indoor-outdoor connections on the balconies and terraces that spiral up the building in an organisation inspired by organic growth and form." 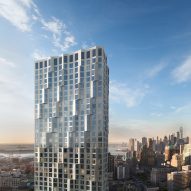 One Delisle's site is one block away from the intersection between Yonge Street and the city's major east-west street called St Claire Avenue. Marking an important transit point in the city, the area is currently under development by the project's backer, real-estate company Slate Asset Management, which currently holds plots on the four corners at the intersection.

Slate believes Studio Gang's inclusion of outdoor space will set it apart from other residences in Toronto, which is experiencing a boom in high-rise developments. Architecture firms including Hariri Pontarini and Pinnacle, Foster + Partners and 3XN have all recently revealed designs for the city.

"One Delisle introduces a new approach to tower design in Toronto," said Slate's Brandon Donnelly in a statement. "We've brought the kind of outdoor spaces you usually find in mid-rise architecture to high-rise design."

Gang and Slate revealed the project to the local community yesterday, 5 July 2018, and Slate will now make an official submission to City Planning. If approved, it will be Studio Gang's first built project in Canada.

The studio – which was placed at number 252 in the 2017 Dezeen Hot List of the world's most newsworthy forces in design – was founded by Gang in 1997. It has offices in Chicago, New York and San Francisco.

Elsewhere in North America, the firm's other high-rise residential projects include a supertall Chicago tower, and a scalloped concrete condo tower for Brooklyn that follows a departure from glass skyscrapers in New York.