Design Academy Eindhoven graduate Elisa Otañez has created a bight yellow, mobile toilet as a protest against the lack of public facilities for women in The Netherlands.

Originally from Mexico, Otañez noticed that there were many public urinals in cities in The Netherlands to reduce the number of men urinating in the street, but that there were very few facilities for women.

The graduate from the Social Design masters programme at Design Academy Eindhoven, found that there was one public toilet for every 10 urinals in the city.

"Men were peeing in public, in corners, in the streets, and they got rewarded with toilets," Otañez told Dezeen. "Do women have to start doing that as well to get their public toilets?"

"I wanted to make a solution, something that worked and wasn't only as a protest," she added. "It's kind of an invisible issue – as a woman you are very used to going into a restaurant or a bar, looking for somewhere to go, when actually the city should provide a solution."

Yellow Spot consists of three elements: a bright yellow frame on wheels, panels of canvas that form walls for privacy and a small, yellow container that has a sloped, concave top that acts as the toilet bowl.

The painted frame is made from straight pieces of tubular steel bolted together with industrial joints to create an effect similar to scaffolding.

The yellow-coated walls feature the slogans "free toilet" and "occupied by women" printed in bold black lettering. The front panel of canvas is secured with a clip that allows it to easily be opened and closed. Facts about the number of public toilets available for women are printed on the inside.

The seatless, waterless, polystyrene toilet is loosely modelled on the shape of a jerry can – commonly used for carrying fuel – with a handle on one side. It is designed for hovering over, rather than sitting on. 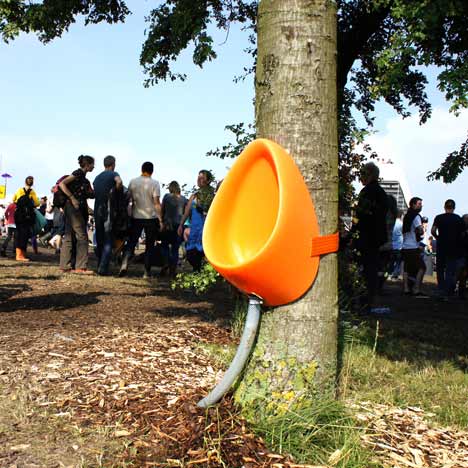 "Mobility is important in order for it to perform as a protest artefact that ‘marches' around the city demanding toilets for women," she added. "The outcome had to reconcile a functional toilet and a totem of protest that matched together, making sense of each other."

The prototype is polystyrene and vacuum-formed due to time limitations for the project, but the aim is for the bowl to be rotation moulded in the future.

Yellow Spot is Otañez's graduation project. So far, it has been trialled in public twice, once in a market and once in the middle of a public square, where she was asked to remove it by police as they said she needed a permit.

"I had many passionate conversations with women who recognised and identified with the issue, since it's a problem they have been facing all their lives," said the designer. "When women need to provide for themselves their own toilet solutions in response to the inability of the city to do so, they either are punished for it or have to ask permission."

Otañez said that a functional, portable toilet that would meet the needs of all people who identify as women and don't have safe spaces to urinate in public, as well as pregnant and menstruating women, would require more time and research.

"The Yellow Spot acts as a ‘trojan horse' to bring the issue to a wider audience and hopefully, through this, a proper toilet for all needs can be provided," she said.

Other designers who have tackled toilet issues include Nendo, whose proposal for disaster areas could be assembled using empty water bottles, and EOOS, who teamed up with water research institute Eawag to create a self-filtering mobile toilet for areas of extreme poverty.

Aandeboom created tree-mounted urinals to try and mitigate public urination at the Roskilde Festival in Denmark, while Faltazi tackled the same issue with a straw-bale solution.

Photography by Elisa Otañez, unless stated.