The Blue Diversion Toilet, was developed as part of a grant programme by the Bill & Melinda Gates Foundation to investigate ways to "reinvent the toilet" and has now been nominated for this year's Designs of the Year awards.

The project aims to develop ways to improve living conditions for the estimated 2.5 billion people who have inadequate access to sanitation – a major cause of serious diseases around the world.

"We have designed a toilet that works everywhere, from the slums of Kampala to a millionaire's weekend home in the country," said Harald Gründl of Vienna-based EOOS. 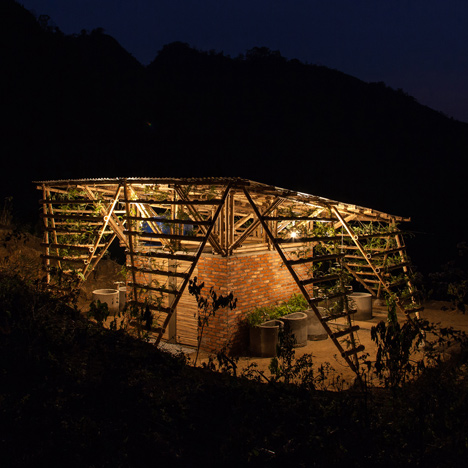 The L-shaped Blue Diversion Toilet is made from a blue-coloured plastic and is 190 centimetres tall. It consists of a shallow bowl at the base, and a tall back that houses a water tank and circulation system, as well as a sink and a shower head for cleaning.

Users step up onto the base and squat over the bowl, which separates waste into a narrow container underneath that holds a 20 litre urine tank and a 15 litre faeces tank. This needs to be emptied every three to four days. Once collected, the waste can be treated and turned into fertiliser – removing the need for a sewer connection.

The liquid from the sink and shower is siphoned off and recirculated for use via the toilet's built in water filtration system, allowing it to provide clean water for hand washing without needing to be connected to a mains water supply. This is particularly important in developing countries and in extreme situations like refugee camps, where a constant supply of water can be difficult to achieve.

"For the first time it will be possible to make clean water available for personal hygiene in regions lacking their own water supply," said a statement from the designers.

Membrane filters usually require regular cleaning to remove material that clogs the system, in a process called backflushing, which involves a significant amount of energy. Eawag's version avoids this by using microorganisms suspended in the liquid to help clean the waste through a natural biological process, and uses gravity to push the liquid through the filter.

The filtration system produces water that is theoretically clean enough to drink, although it also becomes salty, making it unpotable.

The system requires just 11.5 watts of power, which is provided by a solar panel. This keeps the water moving around the system with various pumps, and also powers the flushing mechanism.

"Compared to conventional water recovery technologies, this is a low energy requirement," Said the designers. "It can be achieved because of the wash water receives low contamination thanks to the source-separation technology."

The toilet is made from a type of polythene plastic with a steel bar for support, and is designed to be locally produced and easy to transport. The designers envision that it will be managed and rented out by micro businesses.

"Whether our system can really be implemented depends on how good our business model is," said Eawag engineer Tove Larsen. "No solution that relies on permanent subsidies will function over the long term."

The toilet has had two field tests, one in Uganda in 2013 and another in Kenya in 2014. The current design is the fourth version and second working prototype.

Many of the components have been redesigned since the first iteration of the toilet, to make them more suitable for mass manufacturing, but the team is still hoping to reengineer some parts and reduce the cost of manufacture to make the toilet a viable commercial product for the markets they are targeting.

EOOS and Eawag are now working on a version with a seat, and a second toilet design that can treat urine and faeces on-site.

A prototype of the Blue Diversion Toilet is currently on display at London Design Museum in Shad Thames as part of the this year's Designs of the Year exhibition, which runs until 23 August. Other designs in the exhibition include a mushroom modelling kit, a wheelchair wheel with springs instead of spokes, and a giant filter for cleaning plastic from the oceans.

More from Designs of the Year