The polyurethane foam building blocks, which come in a variety of geometric shapes, can be used as stools or stacked to create room dividers and benches and chairs.

The Lebanese company currently produces two collections: Moonstruck, which resembles marble, and Bonding Blues, which is designed to recall the traditional terrazzo flooring tiles used across Lebanon and around the Mediterranean.

The products are the result of architect and Blocksfinj founder Chrystele Karam's experimentation at her family-run foam factory, Nasri Karam and Sons, which is run by her father, who is a chemical engineer.

Chrystele named the company Blocksfinj after the local name for one foam unit, which measures two by one by one metre and is the starting point of all the Blocksfinj pieces.

With every collection, Karam experiments with different production techniques and material combinations to develop foam patterns, materials and different sizes that fit into living and work spaces.

The Moonstruck collection, which mimics marble but is described by Karam as appearing like a "hybrid between a lunar surface and quarried marble", is made up of geometric shapes that can be assembled and dispersed to form furniture and spatial configurations for different functions.

"Foam is an unpredictable material that allows for randomness to be a design tool, and Moonstruck is the product of the designer falling in love with the power of the material and its potential," said Karam. "Having an architectural nature, it invites children and adults alike to explore different compositions in space creating their own imaginative play."

Each of the Blocksfinj products come with a maturity level that defines how long the foam has been aged, and how it is designed to age.

The Moonstruck collection reacts to light, and as it grows older, it transforms into a deep yellow colour. Customers can control this transformation by exposing it to light in different ways.

"The collection," Karam explains, "matures in four main stages. The first starts on its date of birth until it's one month old, the second benchmark is at two months, the third at three months and the fourth as it hits one year."

Following the maturity level calendar, customers can return their purchases from the Moonstruck collection and receive a ten per cent refund or a ten per cent discount on their second purchase from the collection. The returned pieces are then recycled and used to make new pieces.

"All of the factory's foam offcuts and foam waste never end up as waste in dumps," Karam told Dezeen. "They are given a second life by being shredded into small pieces and then combined in large industrial mixers with bonding agents. The mix is then poured into a block mould, and pressed for 24 hours to form a cast block of bonded foam which is used in the furniture, shipping and wind industry."

The terrazzo-like Bonding Blues collection is based upon the existing man-made shipped foam technique that was already used at Blocksfinj's parent factory in Lebanon. The new architectural foam terrazzo material was created after extensive compositional studies.

The result is two contrasting types of foam terrazzo: one is soft and light and made from one type of foam, while the other is hard, and dense made from bonded small aggregates. 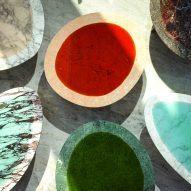 The first is based upon the individual aggregates that are found in a traditional 20 x 20 centimetre terrazzo flooring tiles. Karam recreated these aggregates at ten times the size to create unusually-shaped blocks of foam that fit together to form a giant 200 x 200 cm square tile described by Karam as a playful "space puzzle".

The second foam terrazzo is a multi-coloured high density blue aggregate. "To make this block, local foam material waste and offcuts of different types are gathered, sorted and coloured with the desired shades before being shredded into small pieces that become the foam aggregates."

"These multicolored foam aggregates are then combined in large industrial mixers with bonding agents. The mix is then poured into a block mold, and pressed for 24 hours to form a cast block of foam terrazzo."

Karam founded the company with the belief that local production should be both high quality and accessible at the same time.

"By owning a piece of Blocksfinj, you are investing in the local industrial production chain in Lebanon," she says.

"Your purchase supports local designer-makers as well as their network of local manufacturers, artisans and suppliers, where designer-makers are fully involved in the production process from the design to the retail phase."

During Beirut Design Week, Blocksfinj created a store space for Editions-X – a manufacturing platform founded by Nour Raad in 2017. The store installation, called Sfinj Motel, was described as a "foam habitat" built using pieces from Blocksfinj's collections. The store sold a series of foam-related apparel created by local designer-makers in Beirut.

Now in its seventh year, Beirut Design Week took place between 22 and 29 June 2018 bringing together more than 25,000 visitors at over 150 events in various locations around Beirut.

Other exhibitions included a collection of colourful marble and resin furniture and lighting by Lebanese designer Carla Baz, and a showcase of products created by emerging designers from across the country.