Designer Rick Tegelaar explains how the Meshmatics Chandelier he developed at university became a Moooi product in this movie in our Design Dreams series for the Dutch brand.

Launched by Moooi at Milan design week in 2017, Tegelaar's Meshmatics Chandelier is made from three concentric, inverted wire-mesh domes of different diameters and heights.

The wire structure reflects light emitted from an LED source concealed within a smaller gold dome at the base of the chandelier.

"It's a big light, but it's not a big visual block," Tegelaar says in the movie, which Dezeen filmed for Moooi in Arnhem and Amsterdam in the Netherlands.

"It's really transparent. It's almost like a cage for the light, so you have all these different transparencies and reflections that give this very basic material something almost magical."

The light is the culmination of many years work for Tegelaar – he first developed the technique of using wire mesh to create lights while studying product design at ArtEZ University of the Arts in Arnhem between 2007 and 2011.

He says that he felt mixed emotions in finally letting go of the product.

"Meshmatics Chandelier being in the collection of Moooi is a bit like my child leaving home," he says.

"It is a bit scary, but it's also nice to see the product really taking off and popping up in showrooms around the world."

Born in Rotterdam in 1986, Tegelaar initially studied engineering, but switched to industrial design for the greater creative freedom.

"When I was younger, I spent a lot of time in our garage. I was always taking apart broken-down appliances, old bicycles, stuff like that," he says.

"I thought I wanted to be an engineer, so I learned how to weld and to use a lathe and a mill and all those basic skills. But then I realised that I really wanted to explore my creativity more. So that's when I switched to industrial design."

While studying product design in Arnhem, Tegelaar used his engineering skills to develop a method for moulding wire mesh, which he used to create a range of different lights for his graduation project. 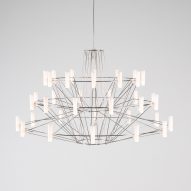 "I was always working with these basic materials and I developed this technique of forming chicken wire in a very controlled way, very accurately," he says.

"These lights were a starting point to really develop the Meshmatics Chandelier for Moooi."

The lights proved a big hit at his graduation show and Tegelaar started producing them himself.

"When I graduated, I was absolutely broke, because I'd invested all my time and money into developing this technique," Tegelaar recalls.

"But then people said: 'Hey, we we really like these lights, can we buy them?' So I started producing them."

But Tegelaar says that he soon grew disillusioned with being a designer and producer.

"At first it was great because I could make a living," he says.

"But at one point I was making lights seven days a week. I realised that I actually wasn't a designer anymore – I was just producing. Being a designer was my dream, it was what I really wanted to do. That's when I knew I really had to think about the next step and find a producer."

However, the route that lead to Moooi eventually taking on Meshmatics Chandelier was highly serendipitous.

Tegelaar was working on a different light together with a manufacturer that made some of Moooi's existing products. The manufacturer introduced Tegelaar to Moooi co-founder Casper Vissers, who realy liked the product and the light was eventually launched as a Moooi product called Filigree in Milan in 2016. 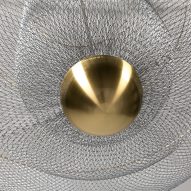 A month before the launch of Filigree, Tegelaar was exhibiting his mesh lights at the Design Days Dubai trade fair and found that his booth was right next to fellow Dutch designer and the other co-found of Moooi, Marcel Wanders.

Knowing that he would be launching Filigree with Wanders in Milan next month, Tegelaar went up to Wanders and introduced himself.

"We had never met one to one," he explains.

"We talked a bit about Filigree – just some small talk. And then, all of a sudden he said: 'That's all great, but who made this?' And he pointed at the Meshmatics Chandelier. I said: 'Well, I also made that,' and he was like: 'Dude, why did you never show it to me?'"

That was the moment that led to Meshmatics Chandelier becoming a Moooi product, as Tegelaar spent the next year working with Moooi to develop the design.

"I worked with Moooi's product development team to turn my artisanal process into a more industrial process," he explains. "And Meshmatics Chandelier was launched in Milan in 2017."

This movie was filmed by Dezeen for Moooi in Milan and London. It is part of an ongoing collaboration between Dezeen and Moooi called Design Dreams exploring how successful designers turned their dreams into reality.