Foster + Partners has unveiled plans to turn a 1970s building in Madrid, Spain, into offices, which will feature a diamond-patterned exterior and a rooftop terrace.

The four-storey building, which will be named Axis Madrid, is situated at one of the city's key intersections, perched between the main north-south artery, Paseo de la Castellana, and Génova Street, a major east-west route.

Currently a bank, the building overlooks the busy Plaza de Colón, which sees an influx of crowds from the nearby Chamberí district and fashionable Salamanca neighbourhood. 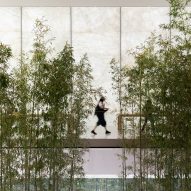 Originally built over 40 years ago, Foster + Partners' believe the contemporary overhaul of the structure will create a "new iconic landmark that reflects the prestige and importance of the site".

"[The project] establishes a new vision for the existing 1970s structure, stripping it back to its essence and creating a flexible, future-proof building that will endure," Norman Foster, the firm's founder, said in a statement.

Renderings show that the building will have a slightly slanted glass facade with a latticed steel framework, intended to flood interiors with natural light.

The ground floor will have a selection of shops, with the first and second floors dedicated to offices. The third level will play host to a greenery-lined terrace, which is intended for social gatherings and informal meetings.

Stairs, lifts, and other service facilities will be concentrated to the building's south elevation, meaning the rest of the floor plate is freed-up to create workspaces.

At the centre of the building an airy, light-filled atrium is designed to counteract Madrid's warm climate.

Foster + Partners, which featured at number nine in the latest Dezeen Hot List, recently created an Apple Store in Macau, China, that's composed from translucent stone walls and surrounded by dense thickets of bamboo. The practice are currently working alongside RIBA to launch the UK's first architecture apprenticeship schemes.