The design studio behind the Fitbit has revealed its latest wearable product – a device that aims to prevent rape by increasing users' awareness around consent.

New Deal Design's Buzz wearable is a sensor-enhanced bracelet that monitors a person's capacity to consent, and shares that information with their date or friends.

To design the product, the studio worked with specialist Jennifer Lang, a gynaecologist with a background in assisting victims of sexual assault, and her business partner Robert Kramer.

The duo had seen that there was a high correlation between incidences of sexual assault and heavy drinking on US college campuses, and thought that could form the basis for a new preventative technology.

"They came up with this idea that maybe we could tie it all together and create some kind of alert system," New Deal Design head Gadi Amit told Dezeen. "We took it to the next level."

"We wanted the system to intervene a lot earlier in the story of the night and create a positive tool for partners to start having a discussion about capacity to consent a lot earlier."

Buzz is designed with college and older high-school students in mind. The device focuses on blood-alcohol level because, of all the complex factors around sex and consent, drunkenness and its effect on the capacity to consent are the easiest to quantify.

"There are a lot of ambiguities and grey areas and miscommunications," said Amit. "These are young folks essentially starting their sexual life."

"But it's quite a known scientific factor that there's a point where you are crossing the line in terms of your consciousness, and you become too drunk to know what you do," he continued.

"The device allows one person to check whether another is not too drunk and be aware that they be crossing the line of the capacity to consent."

"We're not claiming that this is the answer that will save the world from all sexual assault, but it could be a very good tool for preventing some of them," he said.

The Buzz system centres on a brightly hued wristband with a sensor that reads blood-alcohol concentration through the skin — a technology Amit says has only become available in the last year.

When one Buzz wearer meets another who they are interested in, they can "bump handshake" to exchange their capacity-state information and sync up for the night. If they slip into the "red zone" where they lose capacity to consent, their partner will get an alert.

The system also involves a friend network. Users can share information such as their location with selected friends, who will also get an alert when that person enters the red zone, or if they send a panic or duress signal.

But Buzz is not only geared around the later hours of a date or party when people are incapacitated by alcohol. To make it a positive tool – and to entice young people to actually want to use it – New Deal Design wanted their device to enhance flirting and communication from the early moments of a social occasion.

So, when a Buzz wearer fancies another, they can send "flirt moments", giving a gentle buzz on the wrist. 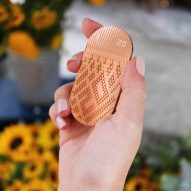 "The biggest thing for us was bringing the boys in," Amit told Dezeen. "We wanted to prevent the situation where this device becomes some kind of modern-day chastity belt and the boys either ignore it or abuse it."

"We wanted to create a system that incentivises both sides to take part in the initiative," he continued.

"It is not only about broadcasting to the other side what's your capacity to consent, but it also allows you to send 'good vibes' if you find somebody attractive, it allows you to engage your friends, or only your best friend, in some kind of 'you cover for me, I'll cover for you' type of arrangement."

"The end result is more than just some kind of alarm bell for when you cross the alcohol consumption limit."

Amit is also enthused about the final look of the wearable, which is covered in a distinctive soft mesh in yellow, blue or grey. The mesh is borrowed from medical devices, where it is typically used to disguise the size or appearance of electronics.

Besides its work on Fitbit, New Deal Design is known for products such as the stick-on Fever Scout child thermometer, the Whistle pet tracker and the Scrip tactile payment device.

Amit said that the studio had initially been reluctant to take on Buzz, due to the delicate subject matter, but that the experience had been so positive they would embrace similarly tough projects in the future.

A team of six New Deal Designers – three female and three male – worked on Buzz, and they abided by a set of rules specific to the project. They agreed that nothing said within the room would be shared outside of it, and asked members to share abstracted examples rather than personal stories.

These measures were meant to create a comfortable environment where designers could talk openly without worrying about their words resurfacing later.

"Typically in an agency like ours, we try to sidestep things that are very thorny politically or socially so we don't get into quarrels within the team, and generally the whole industry is like that," he said. "But everybody understood, joined in and it was a very pleasant experience working on the project."

"It causes me to feel more emboldened to take on tough social issues and answer them through design," he said.