These triangular tiles by Brooklyn studio GRT Architects can be arranged to look like the fluted columns of ancient Greek and Roman buildings, or rotated to form abstract patterns.

Produced by Hungarian company Kaza Concrete, the Flutes and Reeds tiles are based on the surface treatments found in classical architecture.

GRT Architects transferred the simple decoration of vertical concave flutes and convex reeds, which draw the eye up a structure and help increase the impression of height, into a modular format for laying across flat surfaces.

"Fluting and reeding are among architecture's oldest surface embellishments," said the studio. "The Greeks, and most who followed, treated these motifs as linear elements applied to columns, pilasters and walls."

"Greek columns can be thought of as modules or tiles in a way," GRT Architects continued. "Their proportions have fixed rules, there are options for surface embellishments, base and top details."

"From that small set of instructions comes literally centuries of architecture – from the most austere to playful acts of virtuosity. This seemed like a good starting point to design a suite of tiles." 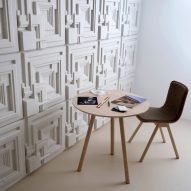 The studio chose to make the cast-concrete tiles triangular, so that they neatly tessellate and form the desired pattern. This also results in a subtle grid overlay when they are installed in the "correct" way.

But the shape also enables individual tiles, rows or large sections to be rotated 120 or 240 degrees and create different ornamentation.

Chevrons, diagonal stripes and "arrangements that harken back to Meso-American pattern-making" are among the possibilities.

The tiles are available in four variations – Single Flute, Triple Flute, Single Reed and Triple Reed – and a selection of colours.

Curved cap designs for the fluted sets can be used along the top or bottom of the vertical motifs for added detail.

GRT Architects debuted the range – its first venture into product design – at Clerkenwell Design Week, which took place in London from 22 to 24 May 2018.

The firm, founded by childhood friends Rustam-Marc Mehta and Tal Schori, has previously completed several architecture and interiors projects in New York City. These include an office designed to look more like a home than a workplace, the renovation of a Brooklyn townhouse, and the overhaul and restoration of the entrance to a historic tower.

Photography is by Madhava Kalmar.