Made from solid Ayous wood, Kombinat will debut at the Maison&Objet interior design fair in Paris next month, as part of Paris Design Week.

Heerenhuis told Dezeen that its design aesthetic is "brutalist, down to earth and no frills".

The brutalist architectural movement, which emerged in the early 1950s in post-war Britain, is known for its raw forms and exposed materials. Many of its building are notably austere, with construction methods intended to communicate strength and functionality.

In the same vein, the Kominat table uses only simple materials and unmasked assembly. Each wooden panel slots into the next with visible tongue-and-groove joints, meaning it contains no nails. 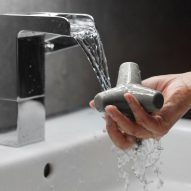 Hereenhuis' products are usually ultra-minimal, much like the manifesto on its website, which reads simply: “We make tables. That’s what we do.”

Kominat is the chunkiest table the studio has produced so far. Instead of slender legs, it features two solid, centralised legs that create a cantilevered effect at the table's ends.

This is also the first time the brand has worked with thermowood techniques – a process that uses heat and steam to treat the wood.

When the wood is subjected to the intense heat, all the moisture and resin is removed from the timber. With such low moisture, furniture created with the thermally treated wood has a higher weather resistance, so can be used outdoors as well as indoors.

“We imagine the table being used outside,” says the studio, “but it could also be impressive in an office environment.”

Images show the prototype of the table, which measures 600 by 105 centimetres. But Heerenhuis said it can make the Kombinat table to any measurements requested by the client.

Maison&Objet runs from 7 to 11 September 2018 in Paris. It is the second edition of the fair taking place in 2018, following on from a show in January 2018. Highlights there included recycled plastic children's furniture and a chair designed to last a lifetime.