Mercer envisions building a series of greenhouses on the Metropolitan Green Belt, a band of countryside that runs around London to control urban growth.

As food can be much more intensely grown in the greenhouses, the amount of farmed land on the belt could be reduced from 59 per cent to just seven per cent, encouraging the development of a more natural, untamed terrain with a diverse array of wildlife.

The concept of the project – which Mercer submitted in the final year of his architecture masters course at the RCA – was influenced by his discovery that more than half of the food consumed in the UK is imported.

Concerned that Britain's plans to leave the European Union could affect accessibility to produce grown abroad, Mercer looked into how the country could become self-sufficient.

"I've been intrigued by the production of food for a while, it's something that every human being engages with on a routine basis but in contemporary western society few of us have an understanding of the complex processes that take it from field to plate," Mercer told Dezeen.

"I wanted to propose a food network that would use the kind of technology capable of ensuring a sustainable future for food production in the UK."

The glass structures are intended to mimic those seen in the Dutch municipality of Westland, which Mercer closely studied for its advanced agricultural infrastructure.

Responsible for almost half of The Netherland's food production, 80 per cent of the area is covered by greenhouses with varied internal climates that can cultivate different crops. 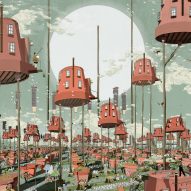 "The agricultural heritage of the UK has conditioned its inhabitants to think of nature as monocultural rolling fields, but these represent a significant human intervention in the natural world," said Mercer.

"This new agricultural framework would facilitate a more sustainable food system, allow the landscape to return to a feral state, and fulfil the original intention of the Metropolitan Green Belt as a collective natural asset for the people of London," he added.

The project would also see the construction of a road-rail bridge to connect the greenhouses to existing distribution bases.

Mercer joins a handful of other graduates who have imagined repurposing some of London's infrastructural sites – last year Damien Assini proposed replacing the HS2 railway with carbon-free modular houses, while Jiaji Shen suggested turning an abandoned coal pier on the River Thames into a workshop for a jewellery maker.