The lamp, created by Picciotto for his masters of product design course at Ecole cantonale d'art de Lausanne (ÉCAL) in Renens, Switzerland, uses LEDs to transmit data through visible light waves to devices with an appropriate dongle.

The lamp also has infrared emitters to transmit data through invisible light, allowing the LiFi connection to remain active even when the light is switched off.

"C-224 is the one of the first LiFi lamps in the world," says Picciotto. "This technology can transform the way we communicate with each other, download data, watch online movies – all at very high speed."

LiFi is a technology that utilises light waves for transmitting data instead of the radio waves used by Wi-Fi. It was first developed at the University of Edinburgh and introduced in 2011 in a TED talk by Professor Harald Haas.

Although LiFi has been used in a few experimental commercial ventures, it has yet to be adopted by the mainstream. Oledcomm is one of the first companies to bring LiFi to the market in an accessible way for consumers. 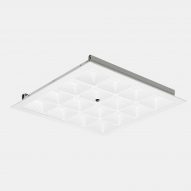 As we use more connected devices, existing Wi-Fi networks may not be able to fulfil demand because of the bandwidth capacity of radio waves. Wi-Fi networks are not only limited by their bandwidth, there are also potential problems with speed and data security.

According to Picciotto, LiFi offers a solution to these issues. Light travels much faster than radio waves and the spectrum of light waves is much larger than that of radios waves.

"LiFi can be 100 times faster than Wi-Fi and to reach the signal you need to be physically under the beam of light, so it is easier to protect data," explains Picciotto.

The c-224 has been designed for use in public libraries, allowing four hotspot connections per lamp.

"The shape of the light diffuser was designed to cover the entire area of the table with light and network," says Picciotto. "The lamp itself has to be welcoming, like a meeting point, to bring people naturally towards it."

The c-224 lamp head is made of aluminium with a Plexiglass Satinice diffusor to spread the light evenly. The infrared emitters are covered with four sections mirror-treated glass to protect the human eye from damage. These four sections are visible as dark dots on the diffuser and lend the lamp its singular look and character.

LiFi could offer a complimentary technology that would decrease traffic on radio waves. Think of concerts and football stadiums, or new year celebrations where connection issues are caused by too many devices trying to use these waves at the same time.

With the increasing demand for permanent connectivity and the proliferation of the Internet of Things, LiFi could help create smart cities if it were to be distributed across urban environments. It could, for example, be emitted through street lights or throughout public transport networks in ceiling lights.