Designer Nikolas Bentel is trying to pass off his naked body as a furniture collection, posing in a variety of ways so his arms can be used for hanging clothes or his tummy forms a coffee table.

Bentel, who is based at New York's New Museum, developed his Corpus Collection as an experiment to gauge how difficult is it to design a range of furniture, from initial sketches to filing a patent.

"I decided that to really understand what our everyday objects need to go through, I need to become one of them and experience the design process first hand," said Bentel in a project description.

"I went through the entire process of designing and patenting my own body as different pieces of furniture to prove a point."

The designer worked on six different body positions over two months. During this time, he assessed the functions of all his body parts and trained up the muscles he required to hold each pose.

His designs include a table, for which he creates a flat surface by assuming a crab position. As a coat rack, he stands on one leg and bends the other forward 90 degrees for draping items over. He also extends out his arms to hang coats from.

For the side table, Bentel lies on his back and brings his thighs into his chest to form a tabletop from his shins and hands, which he places palms-up on either side. 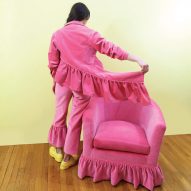 July Londono's Homewear serves as both clothing and home decor

Other pieces in the series include The Lounger, which involves resting on one knee and lifting the other to form a seat, while an arm is extended behind to provide a backrest.

The Chair sees Bentel rest facing down, with his hands and knees on the floor. With a partner in the same pose beside him, he can also create a longer couch.

Bentel detailed each design in a black and white instruction manual, filled with line drawings showing the "furniture" from different directions.

Measurements and angles are added for accuracy, along with suggested amounts of times for holding each position. These range from 4 hours 30 minutes for the chair, which requires less body strength, to one hour for the more difficult table position.

Bentel exhibited the series at the International Contemporary Furniture Fair (ICFF) in New York earlier this year, to see whether it would be appealing for buyers. He said that only few people showed interest, but the process had taught him "a lot as to how much it actually takes to make a simple piece of furniture".

The Corpus Collection is currently awaiting patent approval. It forms the third part of the New York-based designer's All Purpose Nik video series, investigating the nature of the human body.

One of his previous experiments involved chewing pieces of wood to create a functional stool.