Americans will be able to 3D-print their own guns next month, after a court ruled that blueprints for printable firearms could be made available online again. But their creator and distributor says this won't "break the dam" and cause mass weapon uptake.

The ruling last month will allow Texas-based Cody Wilson to distribute his instructions for printing a handgun using ABS plastic, and other weapons, from 1 August 2018, following a multi-year lawsuit.

The founder of non-profit Defense Distributed will reactivate his file-sharing site Defcad to enable users to download the tutorials for so-called "ghost guns" for free.

"The age of the downloadable gun formally begins," said a statement on the organisation's website.

However, Wilson, 30, told Dezeen that the move "is not somehow going to break the dam" and result in a influx of gun users.

"Does this moment mean some sort of vast security threat? I don't think so, I really don't," he said.

"It merely formalises something that was already happening," Wilson continued. "I don't think it's any secret that the gun culture was already quite prolific online. Ever since there's been an internet, there's been large gun forums and markets of information related to making guns."

He described the ruling as "unexpected" and "a direct formal confirmation that this data has unlimited distribution rights online now".

"My model site Defcad, I'll be able to run that in a way that I've always imagined it," he added. "Our culture doesn't have to propagate interstitially, secretly or underground – it's more directly mainstreamed."

The US government blocked downloads of the blueprints in 2013, citing a violation of export laws called International Traffic in Arms Regulations (ITAR), but Wilson sued the State Department two years later.

He claimed that his freedom of speech was being suppressed, and argued that he was only distributing computer code rather than actual weapons. Wilson said the settlement ultimately came down to the government's need to protect the ITAR regulations, which were first created around the second world war and developed during the cold war, rather than have them examined constitutionally.

"The State Department had a choice at this point," Wilson told Dezeen. "They could fight a losing case and risk suffering a degradation of their power under ITAR, or they could just give me what I wanted and live to keep ITAR safe for another generation."

The settlement – announced on 29 June 2018 – has alarmed anti-gun activists, because those without background checks could soon gain easy access to ghost guns, which are not issued with serial numbers and are impossible to trace.

Among the opponents is Senator Chuck Schumer from New York, who has demanded the federal government reverse the decision made in favour of Defense Distributed.

"This online site shows you, how at your home, with a simple 3D printer, you can make a plastic AR-15, an AR-10, a very dangerous semi-automatic assault-style weapons out of plastic in your own basement," Schumer said at a press conference on Sunday 22 July 2018, as reported by the New York Post.

"The danger that could happen can be enormous," he added. "To have crazy people have easy access, to have terrorists have easy access to this kind of website and allow them to make plastic AR-15s undetected – so-called ghost guns – justifies the imagination." 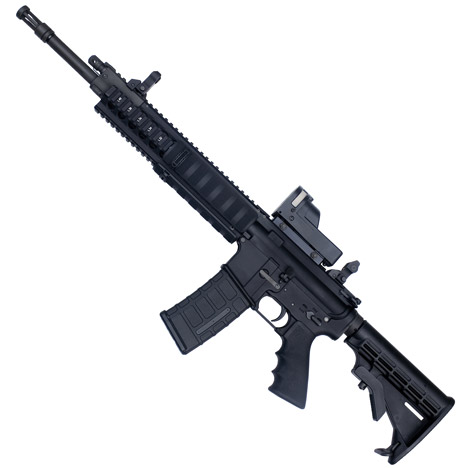 But Wilson believes that these concerns are unfounded, because it is not as easy as one might think to simply 3D-print a gun.

"You still have to have a pretty deep interest in manufacturing and fabrication to make use of the files," he said. "It's still not in the breadth of scenario of: I get a file, I download it, and instantly a gun materialises in my bedroom. It's just not the state of the art."

"It is a step towards an easier and fluid access to guns, mediated through the internet," added Wilson. "I just doubt that it will be the kind of nightmarish-like scenario."

Wilson first successfully fired his 3D-printed handgun, The Liberator, in May 2013. Once uploaded to the Defense Distributed, its blueprints were downloaded almost 100,000 before the government forced their removal, the organisation said at the time.

A version of The Liberator – which is made almost entirely of printed plastic, apart from small amount of metal – was controversially acquired by London's V&A museum in September 2013.