The twisted supertall skyscraper, which finished construction in June 2018, is the 13th tallest building in the world. Its 87 floors are currently being fitted out.

Developers Gazprom, a Russian gas company that will occupy most of the building, also claim it to be the "northernmost skyscraper in the world".

British architect Tony Kettle designed the tower during his tenure at RMJM, before handing the project over to Russian architects Gorproject to complete.

Tapering to a point, the spire has a 90 degree twist from foundation to tip, making it the most extreme twist on a tower after the megatall Shanghai Tower's 120 degree twist.

Kettle said he was influenced by St Pertesburg's Peter and Paul Cathedral when designing the skyscraper, which is formed of five towers tapering around a diminishing circular core.

"My sense was very much to create something that was as light and elegant as the historical forms, capturing the changes in daylight in a similar way to that of the golden domes and spires," he said in his statement.

"The tower was designed as a simple organic spire with asymmetrical movement in its skin, to be seen as a singular landmark at city scale."

Piles were driven 82 metres deep into the city's soft ground in order to anchor the supertall tower and provide stable foundations.

Wind speeds at an elevation of 400 metres in St Petersburg can reach 87 miles per an hour, necessitating a specialised structural system to resist the strong winds. 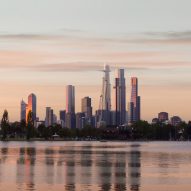 Its smooth glass facade is formed of 16,500 pieces of curved glass, with a system of automatic shutters and valves to make it energy efficient. Energy recuperating elevators, a vacuum waste disposal system and cold accumulators are some of the other technologies employed by the tower to make it more sustainable.

A publicly accessible observation deck will be located at the 360-metre point. A planned restaurant will be Europe's highest panoramic restaurant.

Located nine miles from the centre of St Petersburg on the coast of the Gulf of Finland, the 400,000 square metres of the Lakhta Centre complex also includes a 24-metre-tall entrance archway, a separate boomerang-shaped multi-storey building, and a covered carpark.

Two thirds of the office space at the Lakhta Centre will be occupied by Gazprom's new headquarters, which will employee 8,000 workers on the site. A third of the complex will be given over to public spaces, including a science and education centre, a spherical planetarium, a concert hall, amphitheatre and several squares.

Photography is by Slava Korolev, unless stated.