Over 30 artists and designers have called for their work to be removed from the Design Museum's Hope to Nope exhibition, after the London gallery hosted an event for one of the world's biggest defence companies.

Designers including Milton Glaser, Shepard Fairey and Jonathan Barnbrook have all signed an open letter denouncing the museum's decision to host a trade event for defence contractor Leonardo on 17 July 2018, as part of the Farnborough International arms fair.

In the letter, which is posted on the Campaign Against Arms Trade website, they say they were appalled to learn about the event, particularly when the Hope to Nope exhibition is themed around political activism.

In response, they are demanding that their works be removed from the show by 1 August 2018 at the latest.

"It is deeply hypocritical for the museum to display and celebrate the work of radical anti-corporate artists and activists, while quietly supporting and profiting from one of the most destructive and deadly industries in the world," reads the text.

"Hope to Nope is making the museum appear progressive and cutting-edge, while its management and trustees are happy to take blood money from arms dealers," it continues. "We refuse to allow our art to be used in this way."

The letter also calls for the Design Museum to adopt an ethical-funding policy, refusing any fund from "inappropriate partners" such as arms, tobacco and fossil-fuel companies, and to make it publicly available.

"Museums are not neutral spaces – every decision about what is displayed, how it is labelled and how it is funded is political, and reveals something about the underlying values of the institution," it reads.

"By hosting an arms industry event, the Design Museum is presenting values that are strongly at odds with most of the art in Hope to Nope, which aspires to use the power of design to challenge powerful elites and promote peace and justice."

The Design Museum claims the event was a private party that "formed no part of the museum’s programme or had any endorsement from the museum".

However it has now promised to undertake "a thorough review of its policies", including its commercial activities. It has also appealed to each of the signatories to keep their work in place until the exhibition closes on 12 August.

"We have entered a dialogue in the hope of ensuring that the exhibits remain in place until the exhibition closes to the public on 12 August, to make sure as many people as possible have the opportunity to see the variety of work on display," reads the statement issued by the museum.

"In light of this, we are committing not to have any private event hires from defence, fossil fuels and tobacco companies while we undertake our policy review."

Unclear if works will be removed before show closes

The designers claimed that they had attempted to engage with the Design Museum before going public – but were unsatisfied with the response.

It is unclear now whether any work will be removed before the show closes. Exhibits that could be pulled include the Black Lives Matter quilt by Shelley Hoffman, the Corbyn T-shirt by Bristol Streetwear and the BP or not BP? ruff. 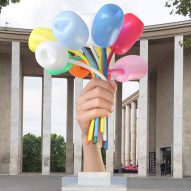 "Our object in Hope to Nope – a Shakespearean ruff in the shape of the BP logo – specifically challenges the unethical funding of arts institutions," said Danny Chivers from BP or not BP? "So it's jaw-dropping that the museum hosted an event for one of the most unethical industries on the planet while displaying our object on its wall."

"Arms dealers and fossil fuel companies both promote conflict and destruction around the world, and no respectable museum should be working with either of these industries," he said.

Sarah Corbett, founder of craft-focused social enterprise Craft Collective, told Dezeen that she wants no association with the museum until an ethical funding policy is in place.

"Museums need to make ends meet, but surely this is not the right way to do it. I hope our stand encourages the museum to adopt an ethical funding policy as a matter of urgency," she said. "I have asked them to stop selling my Craftivism DIY kits until such a policy is in place."

Shepard Fairey, the graphic designer behind the Obama Hope poster, reaffirmed his plans to "take action" via his Twitter feed.

"I'm very disappointed in the poor judgment of the Design Museum in London by renting their space to a company which manufactures military arms while simultaneously hosting an art show of activist images," he tweeted. "I unequivocally do not support this decision and will take action."

Hope to Nope opened at the Design Museum on 28 March 2018. It present a selection of political iconography from the past decade, created in the wakes of events such as the Charlie Hebdo attacks, Brexit, and Donald Trump's presidency.