Living spaces at this house in Waalre, the Netherlands, are contained within a cluster of concrete structures that incorporate large openings framing views of the surrounding forest.

London-based architect Russell Jones was commissioned to develop a proposal for a site within a fir-tree woodland that forms part of the affluent area immediately south of Eindhoven.

Waalre is the site of many properties built during the early 20th century as homes for the management of multinational technology company Philips.

The new property replaces one of these homes, which was designed by Philips' design director, Louis Christiaan Kalff, for the son in law of one of the company's founders, and completed in 1961.

The existing building occupied the best position on the 7,000-square-metre site, so the decision was taken to replace it with a new house that is oriented to optimise its exposure to sunlight and relationship with the original gardens.

"The local planning authority were aware of the history and context of the original house," explained Jones, "and advised that if the design of the new building eclipsed the quality of the original, the proposal would be supported."

"The new architecture takes advantage of key natural features, creating a specific and special exterior and interior relationship with the environment," he continued.

The building is arranged over four levels, with two hidden below ground. The ground floor contains the main living spaces, with bedrooms and gallery areas occupying a rectangular volume that spans the level above and cantilevers out over the main entrance.

A tunnel extending beneath a sand dune that lines the western edge of the building connects a car port beneath the living spaces with the street on the other side of the dune.

This subterranean level also accommodates a gym and a 25-metre swimming pool that receives natural illumination from several light shafts extending down from the surface above.

The main building material used throughout the project is white reinforced concrete, which is left exposed externally and internally to create a consistent surface detail. 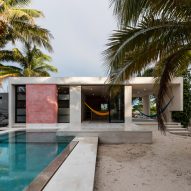 The textured finish of the concrete was created during the casting process using wooden boards with a prominent grain chosen to echo the trunks of the surrounding Douglas fir trees.

"The combination of the rigorous and comprehensive application of board-imprinted concrete and simplified tectonic form produce a legible, sculptural, liveable and environmentally responsive form," the studio added.

The planks used to form the walls were cut to a width of 150 millimetres, and this measurement is repeated in the exterior and interior joinery, which is made from fir boards with a similar grain.

The thick concrete cavity walls provide thermal mass that helps to regulate temperatures inside the building. The lower volumes are topped with native trees and plants, while photovoltaic panels on the main roof section supply the house with energy.

The architects used stone flooring throughout the interior and marble in the bathrooms to introduce contrasting tonal and textural interest to these spaces.

In addition to the basement swimming pool, an outdoor plunge pool is situated alongside a terrace next to the study, and a shallow reflecting pool lines the living space.

The plunge pool features a movable floor that can be raised to transform it into a reflecting pool, or set at the same level as the courtyard to form an extension of its surface.

White concrete is also used for the extension to a traditional farmhouse in France's Provence region by Paris studio Dixneufcentquatrevingtsix, featuring very few openings in its faceted facades.