Royal College of Art graduate Philipp Schenk-Mischke aims to bring an element of chaos to his designs, which include lopsided vases and tables held together by metal blobs.

Schenk-Mischke created these two products as part of a project he calls Process Plug-Ins, which he created for the Design Products masters course at the RCA, and presented during the graduate show earlier this summer.

He wanted to investigate how he could interfere with traditional manufacturing processes, to make them more random in nature. The aim was to create works that reflect his own status, as a young designer in a DIY, post-internet culture.

The name Process Plug-Ins references website design, where plug-ins can easily adjust or hack the design.

"For my graduation project, I aimed to create iterations of classic domestic objects by introducing plug-ins that distort the usual outcome, sometimes forcefully," said Schenk-Mischke.

"My goal with this project is to look at traditional processes – such as modes of manufacture, assembly or use – and spoil them of their straightforwardness and predictability," he explained.

The first product, called BTM Ceramics, is a set of colourful ceramic vases, all of which feature bends and imperfections.

To create them, Schenk-Mischke moulds simple vase forms and then, while the clay is still wet, places them on a fitness vibration plate. The vibrations distort the shape of the vase in a random, organic manner.

"The design process was very experimental and oscillated between trying to gain a certain degree of control over the randomness that is introduced by the plug-ins without making myself obsolete as the maker," said the designer. 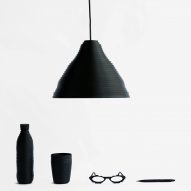 "Although the body vibration plate (which says BTM on it, hence the name) might seem randomly chosen, it was preceded by more than 200 experiments of shaking and vibrating different shapes on different machines that I built over the course of the last year," he added.

"I see the fitness plate as a tool to work and create with, similar to a chisel or a hammer."

The designer creates them by drilling channels directly through the material where the fixings needed to be. He then fills these channels with molten metal, allowing a small spillage at the top.

The spillages form mushroom-like shapes that act like a nail or screw head and hold the pieces tightly together.

"The spillage becomes a blob that sits on top of the joint, similar to a screw head, but more reminiscent of jewellery," said Schenk-Mischke.

The designer hopes his project can draw attention to the expressive potential in industrial materials and also suggest how accidental design can come together with intentional construction.

"It is about reinvigorating things that might have become boring in a fun and playful way. I would like to convey the idea of thinking outside the box and recognising the possibilities in our immediate environments," he concluded

Schenk-Mischke's project was one on several standout projects from this year's RCA show. Others include a series of "normal" objects, made using the average measurements of 50 ready-made examples of five different objects, and a series of ceramics glazed with human urine.