The Japanese architect joined the team from the Voluntary Architects' Network (VAN) to construct a set of paper and fabric dividers inside school gymnasiums where survivors of the torrential rain are taking refuge.

Together with volunteers, Ban erected a modular system of partitions using recycled paper tubes, cardboard panels and fabric to create areas that can be curtained off for privacy. The materials can all be recycled again once they are no longer required.

"It is our mission as professional architects to make living environments better," Ban, who founded non-profit VAN, told local paper The Asahi Shimbun.

"We are just doing our job."

Schools across the Mabicho district have been turned into a refuge for evacuees affected by the torrential rain that swept western Japan.

Up to 30 per cent of the district was submerged under the floodwater, which claimed at least 50 lives. Over 155 people died across the region, making this the deadliest floods the country has experienced in 30 years. 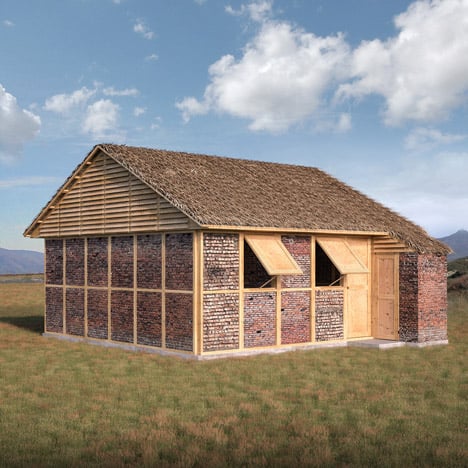 In 2016 Ban travelled to Ecuador to assist the rebuilding effort following a deadly earthquake, offering architectural training in the affected area. The year before he designed modular shelters for those made homeless in the wake of two devastating earthquakes in Nepal using wood, rubble and straw.

He was awarded the Pritzker Prize, one of architecture's highest honours, in 2014 in recognition of his work using low cost materials for disaster relief architecture.

After an earthquake destroyed a cathedral in Christchurch Ban built a temporary place of worship from cardboard and panels of stained glass in 2013. Seven years ago in Japan he created temporary homes in shipping containers for those displaced by an earthquake and tsunami.