Royal College of Art graduate Louise Nissen has suggested converting an abandoned lido in the British seaside town of Margate into a respiratory clinic for Londoners suffering from pollution-related maladies.

Titled Sea Sanctuary, the concept was designed by Nissen in the final year of her interior design masters course at the Royal College of Art.

The clinic would be set inside Margate's now dilapidated Cliftonville Lido – just over 90 minutes away from London – and help inhabitants from the capital who are suffering from respiratory illnesses caused by the poor air quality.

Patients would be treated with various types of therapy that employ seawater or abundant resources from the natural landscape, such as salt.

The lido was developed by entrepreneur and Dreamland theme park owner John Henry Iles in the late 1920s, and later became a nightclub up until its closure in the 1970s. It sits on the same site as the Clifton Baths, which had been built back in the 1800s.

"I grew up on an island in Denmark so choosing a site close to the sea felt very natural," Nissen told Dezeen.

"I was hoping to create some kind of focus on the decaying site, and creating a meaningful place again by using all natural and local resources available, especially what the sea itself can offer," she added.

Nissen began to take an interest in London's pollution levels after comparing the air quality to her native country of Denmark, where, according to Nissen, more people cycle to work instead of using cars or public transport. 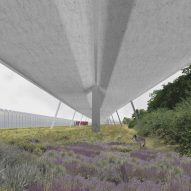 "I've always been surrounded by some sort of nature, and living in London suddenly felt like a risk to my own health because of the pollution – especially when the air pollution levels in London reached the legal limit for the whole of 2018 just a month into the year," she explained.

The graduate envisages the sanctuary as having a series of contemporary, light-hued rooms with windows that frame views of the surrounding sea waves.

Several of the spaces would feature arched doorways or openings, intended as a visual nod to the architecture of the Clifton Baths, which originally featured a huge vaulted chamber and curving corridors that lead to public plunge pools.

As well as a rain room and salt inhalation dome, the project would see the revival of the site's lido.

Several other designers and practices have attempted to improve urban air quality – last year Daan Roosegarde proposed plans to create a bike that can generate clean air as cyclists pedal, while startup Green City Solutions produced a mossy living wall that has pollution-absorbing power equivalent to hundreds of trees.