A mossy "living wall" with the pollution-absorbing power equivalent to hundreds of trees has been installed in London's Piccadilly Circus in a bid to combat the city's unsafe air quality levels.

Designed by German startup Green City Solutions, the CityTree is billed by the company as the world's first intelligent biological air filter.

It was created in response to research conducted by the startup, which revealed that approximately 9,000 Londoners and 50,000 Britons die prematurely each year from respiratory, cardiovascular and other illnesses associated with pollutants.

Each bench is equipped with a so-called "living wall", which is filled with a variety of moss types that naturally absorb pollution. The whole design takes up a fraction of the space that would be needed to yield the same air-purifying results using 275 real trees.

"The ability of certain moss cultures to filter out and absorb air pollutants such as particulates and nitrogen dioxide makes them ideal air purifiers – but in towns and cities where air pollution presents the greatest challenge, mosses are barely able to survive, due to their need for constant water and shade," said the firm.

CityTree, therefore, uses protective, shade-giving plants to create an environment where the specially cultivated mosses can thrive in the urban conditions. 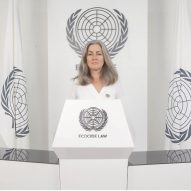 Using Internet of Things technology, it is able to measure and maintain its own performance and the plants' requirements.

The wall of irrigated mosses also generates a cooling effect on the surrounding area, helping to combat the "urban heat island effect."

The CityTree is not the first installation designed to combat pollution in urban areas – Dutch designer Daan Roosegaarde created a Smog Free Tower, which he describes as "the largest air purifier in the world."

Already installed in Rotterdam and Beijing, Roosegaarde claims he can "make a whole city smog-free." Each tower sucks in polluted air at its top, before releasing purified air through vents on its four sides.

Green City Solutions' CityTree has already been successfully launched in cities across Europe, including Berlin, Paris, Amsterdam and Oslo.

Now introduced to London by The Crown Estate, with the support of Westminster City Council, the company hopes to combat the city's rising air pollution levels, which "consistently breach legal annual air pollution limits within the first few weeks of the year," according to the company.

"In a short time, the CityTree has already become established as an effective way to create clean air environments in some of Europe’s most polluted cities," said founder and COO Peter Sänger.

"We are delighted that London can now be added to this list and hope to see many more CityTrees across the country in the years to come."