American studio Tighe Architecture has created a sculptural residence on a tree-studded hillside in Los Angeles that is wrapped in plaster and large stretches of glass.

Designed for a musician, the Hollywood Hills House is situated on a secluded and heavily wooded site in the eclectic neighbourhood of Nichols Canyon, just minutes from the Hollywood Strip. Local studio Tighe Architecture took cues from the terrain while conceiving the multi-storey home, a portion of which is burrowed into the gently sloping site.

"The strata of the hillside site translates into a layering of building strategies used to create the house," the studio said in a project description. "The distinct form of the building optimises airflow, natural light and sun protection."

Wedge-shaped in plan, the 5,200-square-foot (483-square-metre) dwelling has a highly sculptural profile. The solid base consists of board-formed concrete walls, and a wooden entryway and garage door. The first level is wrapped extensively in glass, providing a strong connection to the landscape. 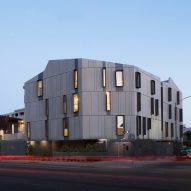 "The facade of glass allows for optimal transparency, and is protected with a layer of screens that allow for sun protection and privacy," the team said.

The top level has a faceted skin made of steel-trowelled plaster that is meant to mimic concrete. Thick columns support the upper volume, portions of which jut out toward the surrounding trees.

"The floating mass is shaped by the constraints of the site and punctuated by series of openings that frame specific views," the team said.

The public spaces are placed on the first storey of the home, while a master suite and two additional bedrooms are located on the top floor. The basement level contains a music studio, laundry room, storage space and a garage.

In the rear of the dwelling, a slender swimming pool forms a strong axis in the landscape. Underwater windows look upon the subterranean music studio.

The residence was designed to be environmentally sound. Sustainable strategies include photovoltaics for power and a solar hydronic system for heating water. The landscaping is also meant to be sensitive to ecological concerns.

Architect Patrick Tighe founded his eponymous, LA-based studio in 2001. Other projects by the firm include a grey apartment building with slot windows and jagged rooflines in LA's Filipinotown, and the revamp of public spaces within two ageing, nondescript office buildings in Burbank.

Photography is by Antonio Follo.